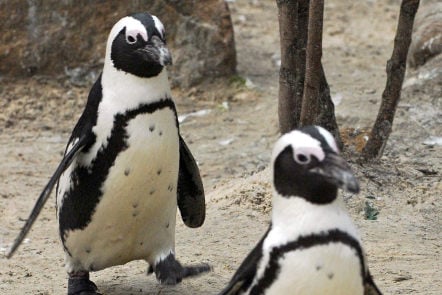 Sandy, an independent penguin if there ever was one, has eaten sumptuously from the smorgasbord of love, and never let convention or public sanction determine which dishes she tastes.

Her history of serial monogamy includes everything from cross-species relationships to a stint as a “cougar” mom and now to what appears to be domestic bliss with Hermann, an older penguin who might have finally tamed the 14-year-old seductress.

Sandy found love early in life. She fell hard for a human at the age of two when she laid eyes on Peter Vollbracht, a much older zookeeper. For the next ten years, she was almost constantly at his side, behaving in some very un-penguin-like ways.

For example, she allowed people to pet her without hacking at them with her sharp beak. Sandy also seemed to accept the built-in limitations to their relationship, including the fact that Vollbracht already had a human family.

But love can be fickle. When illness kept Peter away from the zoo for six weeks, Sandy’s eye began to wander and soon it landed upon someone of her own genus, Tom. Although he was much younger, Sandy moved in for the kill – soon the couple had been blessed with two chicks.

Her happiness was sadly fleeting, however, and when a bacterial infection took Tom to an early grave, Sandy found herself on her own with two kids. Single motherhood was not to her liking; the babes were fostered out.

Not one to stay home by the phone on a Saturday night, Sandy soon returned to her first love, zookeeper Vollbracht, lavishing him with affection and delighting the crowds at the zoo again with her displays of love.

“She was looking for someone, and I was there,” Vollbracht told the magazine Der Spiegel back in 2009.

But that was then, this is now. Sandy has found happiness among her own kind again, this time with the older and wiser penguin, Hermann. The couple is busy these days gathering twigs for the nest they’re building together.

While Sandy has moved on, she hasn’t forgotten Vollbracht or her many years with him. She still likes people in general and when Peter talks, she listens.

“But when mating season starts, she’ll only have eyes for Hermann,” said zoo spokesperson Ilona Zühlke.

Zoo staff hope that this love affair is the real thing and that Sandy won’t find her attention wandering when some new young thing joins the enclosure and that Hermann won’t shuffle off this mortal coil just yet.

“Up to now, she’s hasn’t really had that much luck with men,” said Zühlke.