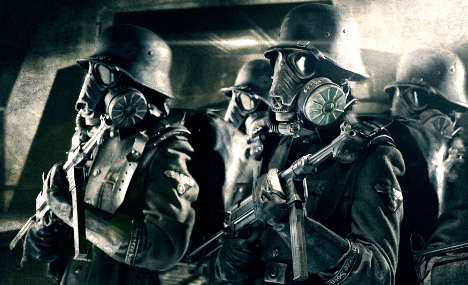 “It combines the satire of Dr. Strangelove with the massive scale of Independence Day,” Finnish producer Tero Kaukomaa told The Local recently.

Filming for the independent production of “Iron Sky” wrapped early this month. Now Kaukomaa is in Berlin promoting it to potential buyers at the European Film Market event – the industry exhibition organised in tandem with the Berlin International Film Festival each year.

“I’m very happy with the responses so far,” the 50-year-old founder of Blind Spot Productions said.

Naturally the idea came up in a sauna, “as we Finns like to do,” Kaukomaa said.

But he and his colleagues, including director Timo Vuorensola, have remained vague on the film’s surreal plot, revealing only that Nazis manage to escape earth in rockets in 1945 to settle on the “dark side of moon.”

There they build a lunar Germania and prepare to return to earth in 2018 and take over the world for a second time after landing in New York.

“When things are meant to be really evil in science fiction films, then characters who look and speak like Nazis crop up. The best example for this is Star Wars,” director Vuorensola told German broadcaster 3Sat in a recent interview. “We wanted to really push it…and see what happens.”

Perhaps more inventive than the plot in the Finnish-German-Australian co-production is the collaboration between the film’s producers and the online community.

With a budget of just €6.8 million, “Iron Sky” makers have turned to fans for funding and help creating parts of the film.

“It’s worked really brilliantly,” Kaukomaa said. “People have been doing bits and pieces, such as recently, when we shot a scene in front of a movie theatre and needed fictional posters for props.”

Through a Finland-based online filmmaking platform called wreckamovie.com, they have been able to utilise the talents of people around the world for such tasks, including creating graphics and writing the German lyrics to the “The Moon Nazi National Anthem.”

As for funding, fans of the film can start with donations as low as €1 for a chance to see a “sneak peek” of the film, buy merchandise, or invest in the film starting at €1,000. If all goes according to plan, €1 million of the film’s budget will ultimately come from crowdfunding.

The first film to pioneer this approach was the 2009 British film, “The Age of Stupid,” but it seems to be catching on, Kaukomaa said.

“It’s going to happen more and more,” he said.