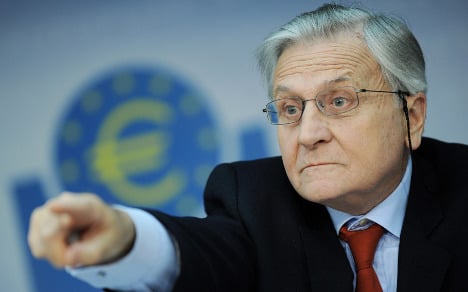 A German replacement for Jean-Claude Trichet in sight? Photo: DPA

Less than seven weeks before Germany was due to officially endorse the Bundesbank boss as its chosen successor to Frenchman Jean-Claude Trichet in October, Weber on Friday threw in the towel for “personal reasons.”

Weber had been in pole position to get the job, with Berlin having refrained from pushing Germans for other top European posts such as EU president and EU foreign policy chief, offices now held by a Belgian and a Briton respectively.

Trichet’s successor will be only the third person to head the ECB, the world’s most powerful central bank after the US Federal Reserve. The first was Dutchman Wim Duisenberg.

Chancellor Angela Merkel’s spokesman said Monday that Germany did not rule out nominating a new candidate, while insisting that the nationality of the next ECB head was unimportant.

“For the government what is important is that Mr. Trichet’s successor shares our fundamental German convictions on a stable currency, what one does for that, and on tackling inflation,” Steffen Seibert said. “The passport is not the main thing.”

But in reality, this is not true, analysts say, with the presence of Portugal’s Vitor Constancio as number two at the ECB effectively ruling out another southern European for the top job.

This is also seen as the main barrier to the man formerly seen as Weber’s main rival, Italy’s Mario Draghi.

“From a technical point of view, he (Draghi) would probably be the most suitable candidate,” UniCredit economist Marco Valli said last week, but his “main problem is his nationality.”

Luxembourg’s Yves Mersch and Finland’s Erkki Liikanen are seen as other possible names in the hat.

Weber was known for his hard-line stance on ECB policy, especially his opposition to ECB purchases of eurozone government bonds, a measure the bank adopted last year to help struggling banks get through the financial crisis.

Weber told Der Spiegel magazine that he was resigning, effective April 30, because he did not have enough international support.

“When one defends a minority position on basic questions, that harms the credibility of one’s function,” Weber told the weekly in an interview published on Monday.

“Taking such positions has not always helped my case with certain governments.”

Other German candidates are thin on the ground. The name most widely touted as an alternative so far, Klaus Regling, heads the eurozone’s rescue fund but he has no central bank experience.

The succession comes as the ECB scrambles to cope with a crisis that has shaken the eurozone to its very foundations.

Bailouts for Greece and Ireland went down badly with voters in Germany, Europe’s paymaster, and Merkel has set as her price for the help greater austerity and much closer economic and fiscal cooperation in Europe.

“It would be an advantage if the ECB president could explain to the German public and parliament in their own language why German taxpayer money needs to be put at stake,” Holger Schmieding at Berenberg Bank said.