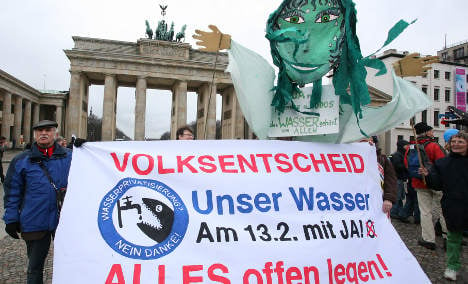 The vote demanding the partially privatized water works open its books to the public was a defeat for the city’s coalition of centre-left Social Democrats (SPD) and the socialist Left party, which had said it was unnecessary.

Some 27.5 percent of the city’s voters turned out for the referendum – above the 25 percent required. Among the more than 678,000 voters, an overwhelming 98.2 percent voted in favour of more transparency for the city water contracts.

Mayor Klaus Wowereit conceded defeat on the matter but also said he saw the vote as added support for his government’s intention to repurchase the utility.

“I consider this backing for the goal of the senate to buy back formerly privatized parts of the water works,” he said.

The vote is proof that Berliners “want transparency in the handling of public property,” he added.

But the opposition Greens mayoral candidate against Wowereit in this year’s state election, Renate Künast, called the vote a “cold shower” for his coalition.

Berlin sold 49.9 percent of its water works Berliner Wasserbetriebe (BWB) to investors Veolia and RWE to fill the city’s empty coffers in 1999. According to proponents of the referendum, water prices have increased by 35 percent since then, and are among the highest of any German city.

After the November 2010 online release of some 700 pages of secret water contracts, the senate had declared the referendum moot.

But referendum initiator group Berliner Wassertisch said not all documents had been published and private companies had made exorbitant profits through the contracts.

According to the group, a number of lucrative subsidiary agreements still remain private and must now be made public.