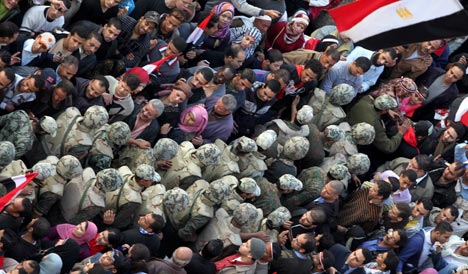 “This entire process should and must remain in the hands of Egyptians themselves, but we are ready to offer any help that might be desired,” said Hoyer, a minister of state at the Foreign Ministry and member of the Free Democrats.

“Egypt now has an opportunity to serve as a beacon for the entire region,” he added. “That is why we all have a great interest in seeing that this process succeeds.”

He suggested sending election monitors to the country soon so that they could observe the process from the very beginning. According to him, election fraud often begins as early as the creation of voter rolls.

Hoyer called on western nations to engage the Muslim Brotherhood in dialogue and said he had never understood the fear that many have of the organization. In addition, he added, a group that could get 20 to 30 percent of the vote in an election cannot simply be ignored.