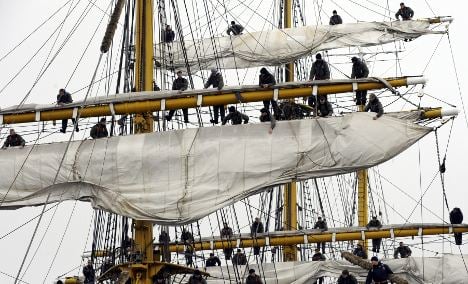 Earlier this week, daily Bild reported that a navy investigation had found that Sara Lena Seele, whose death last November set off what has been called a “mutiny” on the ship, was overweight and should not have participated in the climbing exercise that led to her death.

The report said that Seele’s height-weight ratio – she was 1.58 meters and weighed 83 kilos (5’2”, 187 lbs.) – should have excluded her from strenuous duty on board ship.

The report also declared she was unfit for duty.

But the 25-year-old’s family has vehemently disputed the report.

“My daughter never weighed 83 kilos,” her mother told Bild on Friday. “When she left Germany it was not more than 60 kilos.”

The massive weight gain in the navy investigative report may have actually occurred after the cadet’s death, when Brazilian doctors preserved her body with formaldehyde for the trip back to Germany, Bild reported.

Apparently the treatment was necessary because the plane transporting the body had no cooling facility, the paper said.

Experts told Bild the body would have likely been filled with some 10 to 15 kilos of formaldehyde, which could account for why the autopsy reported her weight to be 83 kilos.

“The navy investigators took the number – perhaps without asking how the proportionally high body weight could be clarified,” the paper wrote

Seele fell some 27 metres during a rigging exercise while the ship was in the Brazilian port of Salvador de Bahia. She died later at a nearby hospital.

The Gorch Fock, a tall ship that was once the pride of the German navy, has since been the centre of allegations of bullying, sexual harassment and the all-around bad behaviour of its officers, who reportedly spent much of their time on the ship sunbathing and partying.

Both Seele’s death and the conditions on the vessel are under investigation. The ship has been ordered to return to Germany from South America.