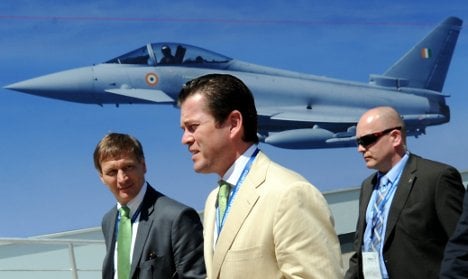 “You can have someone explain it to you in the abstract,” said Guttenberg. “But at the end of the day, I have to decide. The commander has to experience what happens.”

The conservative politician was speaking at an aviation conference in Bangalore, India, where he is supporting a bid by the European weapons giant EADS to sell 126 Eurofighters to the Indian government.

Guttenberg took pains to emphasize that he would ride along in a training flight that was scheduled to take place anyway, so that the state would incur no extra costs.

The Defence Ministry estimated last year that one-hour flight in a Eurofighter cost €76,000, though this is said to have come down slightly now that the fleet is larger.

Guttenberg has already taken a fitness test for the fighter jet, which can reach speeds of 1,550 miles per hour, and has had the equipment fitted. The training flight is likely to take place at an airbase near the northern town of Rostock.

Opposition politicians have criticized the minister for attempting to sell the

Eurofighter to India. Gernot Erler, deputy leader of the opposition Social Democratic Party’s parliamentary faction told news magazine Der Spiegel, “The intended sale of 126 Eurofighters to India won’t contribute to peaceful conciliation. It will be an escalation” on the subcontinent.

At the conference in India, Guttenberg countered these complaints by saying, “Those who are currently criticizing this or that point have occasionally made such decisions in the past themselves.”