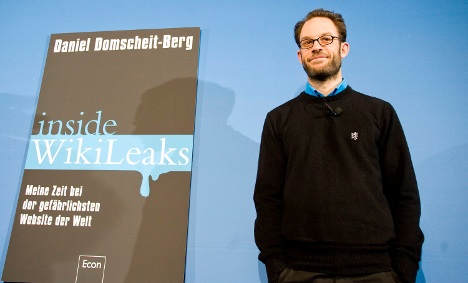 Presenting his new book in Berlin about his time working with Assange, the German programmer said WikiLeaks now lacked the infrastructure to handle data that could lead to new earthshaking revelations.

“WikiLeaks is no longer functioning, you cannot submit anything and there’s no mail server,” he said at a press conference. “It’s definitely not dead, but where is it headed?”

Domscheit-Berg also admitted he and others took with him essential parts of the WikiLeaks platform software along with a small trove of information because he did not feel Assange could protect it or its sources from potential harm.

Though he has since offered to return should WikiLeaks prove it can ensure proper security measures, the website’s lawyers are now threatening to sue him.

His book, “Inside WikiLeaks: My Time with Julian Assange at the World’s Most Dangerous Website,” offers a personal account of his experiences with the charismatic Australian at the head of the organization responsible for leaking US diplomatic cables and secret Pentagon files on the war in Iraq.

Styling himself as the anti-Assange – a buttoned-down Teuton versus an anarchic Aussie – Domscheit-Berg said he hoped to set the record straight after falling out with Assange and leaving WikiLeaks last autumn, along with others.

“Assange is distorting our departure,” he said. “Anyone who criticizes him is discredited and receives a letter from a lawyer.”

Often going into trivial detail about his time with Assange, Domscheit-Berg paints an ultimately unflattering portrait of the WikiLeaks mastermind. He even claims Assange tormented his pet cat.

But Domscheit-Berg denied the book was about getting “payback” against his former friend and colleague: “Julian started this mudslinging.”

While admitting Assange was “courageous” and “brilliant,” Domscheit-Berg said he and other former WikiLeaks collaborators were disturbed by his need for secrecy and lack of transparency.

Domscheit-Berg also said Assange had worrying ties to people of dubious character, such as the Sweden-based Holocaust denier Israel Shamir, whom Assange allegedly wanted to let work with WikiLeaks under a false name so as to not attract unwanted attention.

He said he eventually decided he could not go along with Assange’s credo of “preaching transparency for others but disguising yourself.” Domscheit-Berg said though he still believed in WikiLeaks’ aims, there was no reason “to make everything like a James Bond film” like Assange tended to do.

Domscheit-Berg said Assange frequently showed megalomaniac tendencies and attempted to concentrate all power at WikiLeaks with himself. He also resisted making the group’s finances transparent and accountable.

“He claimed I was in a ‘Germanic bubble’ and that I need too much structure and organization,” Domscheit-Berg said. “I was told (finances) were none of my business.”

The programmer said his new project OpenLeaks intended to learn from WikiLeaks’ mistakes.

Besides working with established media partners, the new website plans to cooperate with non-governmental organizations.

“We’re just going to be a service provider,” he said, promising the 12-person group would not be shrouded in secrecy.