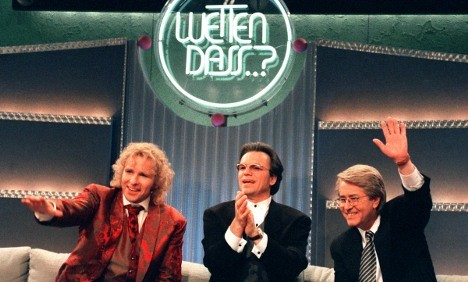 The anniversary show, to be screened on Saturday evening by public broadcaster ZDF, will be overshadowed by the fateful accident by candidate Samuel Koch on December 4. Koch broke his neck while attempting to somersault over a series of moving cars on power-jumpers. The car he failed to clear was being driven by his father.

ZDF’s entertainment boss Manfred Teubner said that a new safety system had been introduced following the accident. From now on, the show’s “bets” will be vetted according to a scale from 0 to 3. “Extremely athletic bets like that of Samuel Koch belong to category 3. They will no longer be performed,” said Teubner.

The 23-year-old Koch is currently still paralyzed from the neck down, and is undergoing therapy in a Swiss clinic near the German border. According to a report in Stern magazine, Koch has four hours of muscular therapy a day, and is fed three times a day by his parents. He told the magazine he wished he could do the movement therapy “round the clock.”

Koch is expected to spend several months in the Swiss clinic, and it is still uncertain whether he will ever walk again.

The Wetten, dass…? show was broken off after the accident, cancelling the appearances of stars including Justin Bieber, Cher and Take That.

“It is the first time in my long, long career that such a thing has happened and we have carried out many dangerous stunts,” veteran host Thomas Gottschalk said at the time.

“I have always said that would be the worst thing for me, if something happened to one of my candidates in a live show.”