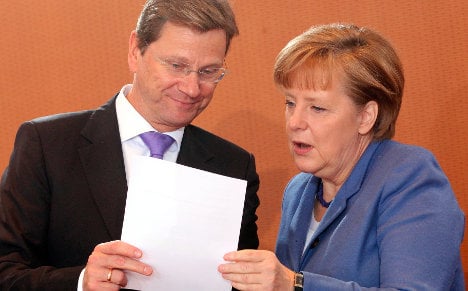 Meanwhile the centre-left Social Democrats (SPD) and the environmentalist Greens together garnered 42 percent of their support in the poll.

The results are a drastic swing back in the coalition’s favour after it reached an all-time low in voter support last October. It is also the narrowest margin since May of 2010.

Broken down by party, Merkel’s CDU registered the most support at 36 percent, followed by the Social Democrats with 22 percent. Meanwhile the Greens picked up 20 percent, the socialist Left party got 10 percent, and the FDP remained at a lowly 5 percent.

The junior coalition party failed to gain popularity despite leader and Foreign Minister Guido Westerwelle’s high profile conduct during the ongoing popular uprising in Egypt, with 71 percent of the poll’s respondents saying he was not doing his job any better than several months ago.

The embattled minister maintains a shaky grip on his party, within which some have called for his resignation to jumpstart their flagging popularity.

Appearing beholden to special interests and led by the unpopular Westerwelle, the party has plumbed record lows in opinion polls heading into a year full of important state elections.

The first, set for February 20 in Hamburg, could even see a coalition between the FDP and the SPD, which would be particularly positive for the latter after struggling to bring up its numbers, head of polling institute Forsa, Manfred Güllner, told Stern.

“In Hamburg the alliance of workers and business people has a good tradition,” he said. “It would signal that the SPD is searching for its voters in the middle class again.”

The “old party of workers” is a good contrast to the Greens, most of whose members work as government employees, he said. Most states that have had coalitions between the Greens and the SPD have also voted out the centre-left party after the fact, he added.

And even if the FDP is currently unpopular, their constituents – many of whom are business leaders and owners – round out the working class, he said.

But according to news magazine Der Spiegel, the FDP hasn’t managed the minimum five percent of votes to make it into the city-state’s government since 2004. A local poll recently showed the party had nudged above five percent in popularity, though, sparking speculation over a possible SPD-FDP coalition.

Research institute Forsa interviewed 2,507 representative voters across the country for the poll.