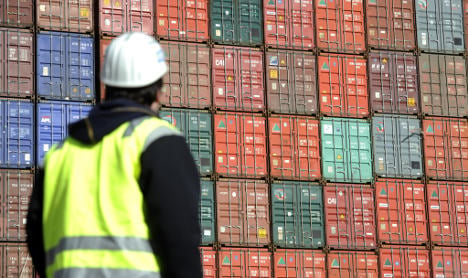 It was the biggest annual rise in exports since Germany’s reunification in late 1990 and the biggest for the former West Germany since 1974, a Destatis spokesman told news agency AFP. It was also the third highest level of exports ever after 2008 and 2007, he added.

But Germany, the world’s second biggest exporter after China, also took in imports worth €797.6 billion, the Destatis office said, a jump of 20.0 percent from the level in 2009.

Germany has been criticized by eurozone partners for not buying more goods from them but a breakdown of the data showed imports rose faster than exports for both the eurozone and broader 27-member European Union in 2010.

German exports to eurozone partners, which numbered 15 last year, grew by 12.7 percent while imports were up by 16.7 percent.

For the full EU, German exports gained 14 percent, but imports rose by 17.5 percent.

“Strong growth of the German economy is also having a positive effect in our neighbouring countries,” Commerzbank analyst Ulrike Rondorf noted.

“Solid domestic demand is pushing imports up, including imports from the eurozone,” she said.

Officials in Berlin expect the German economy to grow by 2.3 percent and the public deficit to fall back below the EU limit this year to 2.5 percent of gross domestic product (GDP).

The country suffered its worst post-war recession in 2008-2009 but roared back last year with growth of 3.6 percent, the best result since its reunification.

“Our recovery stands on two strong legs, trade and domestic demand,” Economy Minister Rainer Brüderle said Wednesday in a statement. The economy “is now in full bloom,” he added.

German growth has often been driven by exports, but falling unemployment, higher wages and increased corporate investment have raised hopes that domestic demand could help underpin a sustained expansion of activity.

In December, German exports nonetheless grew by 0.5 percent on a monthly basis while imports fell by 2.3 percent.

China is growing in importance as a trade partner, but eurozone countries, others in eastern Europe and the United States are also key buyers of products made in Germany, ING senior economist Carsten Brzeski noted.

“It is this diversification which should be a warrantor for further export strength in 2011,” he said.

Meanwhile, the country’s annual balance of payments, a broad measure of trade in goods and services and financial transfers, gained 8.3 percent last year to a surplus of €129.9 billion, data provided by the German central bank showed.