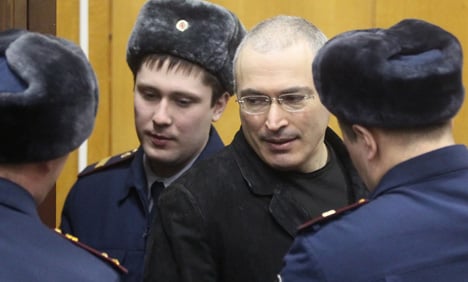 German director Cyril Tuschi told news agency AFP he aimed to shed light on the puzzling aspects of the ex-Yukos chief’s case with his first documentary “Khodorkovsky,” which will still screen as planned at the Berlin film festival Monday.

The film paints a nuanced picture of the man at the heart of Russia’s most high-profile legal saga in interviews with family members, opponents, fellow travellers and, in the picture’s riveting climax, Khodorkovsky himself.

Tuschi depicts the trials as a kind of “clash of the titans” between the country’s richest man, before he was stripped of his assets, and its most powerful, then president Vladimir Putin.

The picture begins with an animated sequence dramatising Khodorkovsky’s return from a business trip abroad on his private jet in 2003, when masked commandos stormed the plane and hauled him into custody.

“The mystery of why he came back to Russia is the main reason why I made the film,” Tuschi, 42, told AFP in an interview the day before the break-in.

“Why would such a rational, clever, logical person make such an illogical mistake with both eyes open? I found this Shakespearean drama — how someone who had reached such a high point could fall so far — fascinating.”

The picture goes on to explore how Khodorkovsky went from a dyed-in-the-wool student communist with a poster of Lenin on his wall to an oil oligarch and a potential threat to Putin.

“I came to the conclusion that the fact Khodorkovsky was maybe a bit smarter (than Putin) and perhaps better looking — an absolutely basic macho conflict — played a major role,” Tuschi said, calling the trials “absurdist theatre.”

Tuschi, whose great-grandfather was a wealthy businessman in Saint Petersburg, was cautious while filming in Russia.

“I was very German about everything — I made sure all my applications, visas, papers, registrations were in order all the time to ensure there was never a pretext to give us trouble,” he said.

“But while we were Siberia we were followed and, I believe, had our phones

While he was editing in Bali a few weeks ago, a hard disk with parts of the documentary were stolen from his hotel room.

Last week, burglars stole four computers on which interview out-takes and the finalised version of the film were stored from his Berlin offices, which were also vandalised.

Police said they are investigating the theft, which prompted furious speculation in the German and international press about possible Kremlin involvement.

Tuschi is reportedly now staying with friends for his own safety and has declined to speak with reporters. But he told the daily Süddeutsche Zeitung: “Someone is trying to scare me and I have to say, they have succeeded.”

Khodorkovsky, 47, was first detained in 2003, convicted of tax evasion two years later and handed an eight-year sentence. He was jailed for the second time in December on fraud charges and is to stay behind bars until 2017.

The film comes to a close with a rare on-camera interview with Khodorkovsky, held in a cage-like cell in the courtroom, as a guard counted down the minutes allotted Tuschi by tapping his back with a machine gun.

“I believed that I had to stand up for myself in court,” Khodorkovsky says, when asked why he returned to Russia to face trial rather than fleeing abroad. “I also believe in something called justice.”

Tuschi said Khodorkovsky appeared driven by a sense of honour.

“I think that is how he manages to stay so strong, so centred, so calm in prison. That impressed me very much,” Tuschi told AFP.

“I think if I were in the same situation I would sign anything, say anything to get out.”