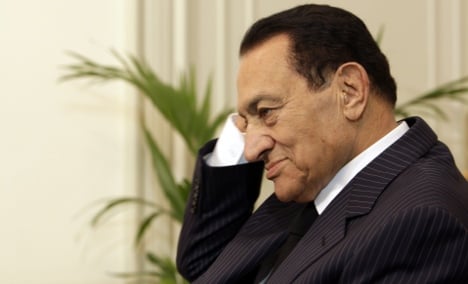 The website of news magazine Der Spiegel on Monday cited unnamed sources at the Max Grundig clinic in the southern state of Baden-Württemberg have said the private luxury facility is the first on the list of potential destinations for the 82-year-old leader.

The claim came in response to a weekend report in The New York Times that US representatives had secretly suggested Mubarak make a dignified exit on the pretext of taking medical leave in Germany, where he has been treated by doctors in the past.

Officials at the high-end hospital near the tradition spa town of Baden-Baden refused to comment on the speculation, Der Spiegel reported.

The German government reacted to cautiously to the speculation on Monday.

“There is neither official nor unofficial requests regarding such a stay,” Chancellor Merkel’s spokesman Steffen Seibert said in Berlin. “Therefore there is no reason for the government to concern itself with this hypothetical question.”

Seibert also said that Berlin continues to encourage the Egyptian leadership to facilitate a dialogue with the opposition, calling the developments over the weekend “just the first step,” but stopped short of calling for Mubarak to step down.

“It’s not our role to demand resignations,” he said, adding that “it is clear the era of Mubarak is in its very last phase.”