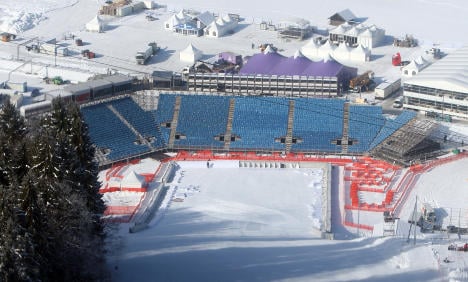 The world championships start in southern Germany on Tuesday with the women’s super-G, and finish on February 20 with the men’s slalom.

Having last hosted the world championships in 1978, Garmisch-Partenkirchen will also host the downhill and nordic events if the Munich 2018 bid is successful when the International Olympic Committee decides on July 6.

If Munich beats France’s Annecy and South Korea’s Pyeongchang to host the 2018 showpiece, Garmisch-Partenkirchen will host nine competition venues, one of the two athletes’ villages, a media village and media centre.

What the world championships do not need are any more high-profile crashes like Austria’s Hans Grugger who suffered severe head injuries at the start of the year in a training accident.

Just a few miles from the Austrian border, in the heart of the Bavarian Alps, the market town hosted the 1936 Winter Olympics under the Nazis.

It is now a regular fixture on the World Cup circuit and it was here that alpine skiing became part of the Winter Olympics programme for the first time.

The world championships’ slalom events will be held on the Gudiberg slope and the Kandahar course will host the super-G, downhill, giant slalom and part of the combined events in the shadow of Zugspitze, Germany’s highest mountain.

As a resort, Garmisch-Partenkirchen is home to several of Germany’s top winter sports athletes and home girl Maria Riesch will be defending the world slalom title she won in Val d’Isere two years ago.

She will also be hoping home turf can help her break United States’ starlet Lindsey Vonn’s domination of women’s Alpine skiing for the last three years as the German is the current leader in the World Cup rankings.

As the reigning Olympic slalom and combined champion, Riesch was born in raised in Garmisch.

She has detailed knowledge of the Gudiberg hill and Kandahar course where she defeated Vonn by more than half a second in the downhill last March in the World Cup Finals.

Germany’s Kathrin Hölzl, who won the world giant slalom title in 2009, also knows what to expect from the Khandahar course.

“The terrain is truncated, has many transitions, is tight and yet still variable before it bottoms out flat,” she said.

“I’m sure it will be a suspenseful competition and I’m really hoping for the support of our ‘twelfth man’, our fans.”