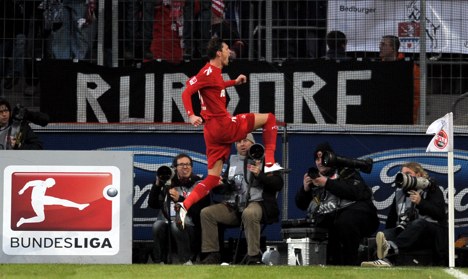 “It hurts,” said Lahm after Saturday’s defeat in Cologne left Bayern fifth in the league and 15 points behind leaders Dortmund. “We’re making life difficult for ourselves. We’re making too many mistakes in our build-up play, and our tackling wasn’t aggressive enough.”

“We made it much too easy for Cologne,” he added. “Yet again, we’ve failed to perform at the start of the second half, failed to carry on where we’ve left off in the first half.”

“Yet again, we’ve fallen asleep for the first 20 minutes of the second half and carelessly thrown away vital points. We wanted to set off on a long winning run, but it’s evaded us again.”

Bayern were cruising after striker Mario Gomez and midfielder Hamit Altintop scored first-half goals to leave Munich 2-0 up at the break.

But the champions’ recent run of seven wins in eight games came to a shuddering halt as Cologne fought back. A capacity 50,000-strong crowd saw midfielder Christian Clemens and striker Milivoje Novakovic haul the home side back into the game with two goals in the first 15 minutes after the restart.

Novakovic then scored the winning goal with a superb effort with a quarter of an hour remaining.

Incredibly, this was Cologne’s fifth consecutive game against Bayern without defeat and Munich coach Louis van Gaal was left fuming as he accused his side of throwing the game away.

“It’s unbelievable,” said the Dutchman. “It’s the fourth or fifth time we’ve thrown a match away. We’ve missed a huge chance today, because all our rivals have lost, with the exception of Hanover.”

“Two goals should normally be enough, but we failed to keep our concentration for the full 90 minutes.”

For home captain and Germany midfielder Lukas Podolski, who returned to Cologne in 2009 after an unhappy spell at Bayern, it was a victory to savour.

“We saw a completely different Cologne from the start of the second half, with our fantastic fans behind us,” he said. “The way we came from behind to win was sensational.”