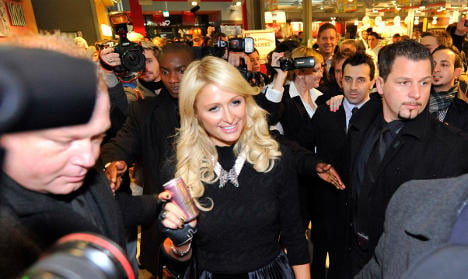 In fact, learning more about Stuttgart 21 is the main reason for making a stop in the Baden-Württemberg city, where the 29-year-old is also scheduled to promote an Austrian Prosecco brand in a can called “RICH Ice.”

On Thursday at a press event in Frankfurt, Hilton professed to being a fan of Germany.

Her tour there included a visit to the financial capital’s stock exchange and a sausage seller.

Brushing off questions about her jet-set lifestyle, she told journalists she wanted to get an idea of the new Stuttgart train station herself.

But opponents mounted a massive protest movement against the project last year, calling it too expensive and a danger to the environment. In October more than 100 demonstrators were injured in a violent clash with police.

The clash was followed by lengthy talks between state officials, national rail provider Deutsche Bahn and opponents. But officials ultimately decided to go ahead with the project after making a few minor changes to plans.