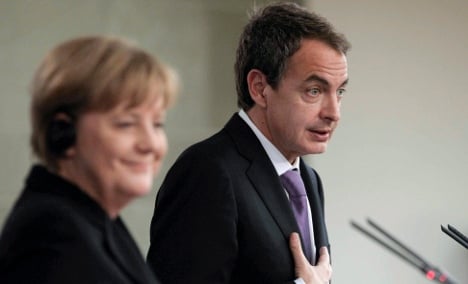 “Spain has really done its homework and for that reason I think Spain is on a very good path,” she said when asked during a joint news conference with Spanish Prime Minister Jose Luis Rodriguez Zapatero if she could “absolutely” rule out the need of a rescue package for Spain.

“The path that Spain is on is very positive, it’s very good that they have carried out their reforms with the backing of unions and businesses … and I think there’s no room for any sort of speculation.”

Her visit comes a day after Zapatero’s Socialist government signed a “grand social pact” with unions and business groups on reforms to revive the economy that will gradually increase the retirement age from 65 to 67 just as Germany has done.

It also establishes the “basic principles” of a reform to Spain’s collective bargaining system, which ensures joint wage rises across sectors and industries.

The deal is critical to Madrid’s campaign to convince the markets that it can push through difficult labour reforms so as to speed up the economy, cut spending, finance the debt and avoid the need for a bailout such as those granted Ireland and Greece last year.

The government has also changed the labour law to make it easier to fire workers, a move it says will create jobs in a country with an unemployment rate of just over 20 percent, the highest level in the industrialised world.

Last week Madrid announced that all lenders must raise their levels of rock-solid core capital or face state intervention, its latest move to strengthen a financial system that is laden with bad debts from its exposure to a real estate collapse.

“The reforms carried out by Spain deserve all our respect,” Merkel said.