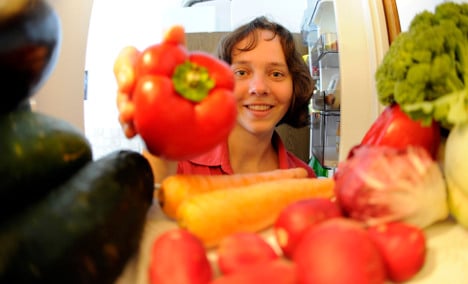 “The idea is simple – two people decide to team up, each halves their consumption of meat and fish and therefore the net effect is one more vegetarian,” said VEBU representative Katharina Rimpler.

“In this way, they can do something good without completely cutting out meat from their diet.”

VEBU also offers a “buddy” system, which pairs vegetarian newbies with long-time vegans and vegetarians so that they can learn more about the practice by cooking or going to restaurants together.

Germans, known for their love of meaty dishes, and sausages in particular, have started to question the source of their food in the wake of the dioxin scandal.

After weeks of controversy following the discovery of the carcinogenic chemical in eggs, the pork industry has been the latest to suffer after traces were also found in meat sold by German farms. The contamination has been linked to a German firm which supplied some 3,000 tonnes of tainted fatty acids to several animal feed makers.

A demonstration in Berlin in late January that demanded reforms to the agriculture industry to protect consumers through non-toxic farming methods drew an estimated 22,000 people from all over Germany.

The motto of the protest was, “We’ve had enough – no to genetic engineering, factory farming and export dumping.”

The government response to the dioxin scandal has focused on examining and tightening controls in the animal feed industry.

VEBU estimates that there are around six million vegetarians living in Germany, which is above average among European countries.