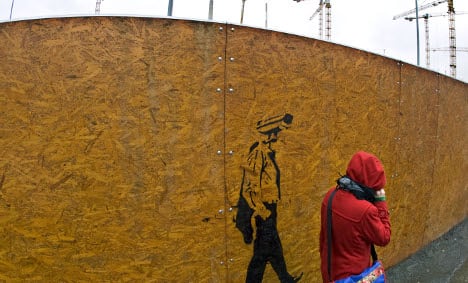 There is an iron rule to lifestyle journalism. When a fashionable magazine spots a trend, it is almost certainly already over.

So, when Monocle – a glossy magazine written for people who live their lives in the dry air of airport VIP lounges – declared “NoTo” to be Berlin’s new hot spot, I was immediately suspicious.

“NoTo” is short, of course, for “North of Torstraße” and it is the antipode of “SoTo,” the cluster of over-priced streets just south of the Mitte district thoroughfare Torstraße. It seems that now NoTo, not SoTo, is the place to go. Why?

Well, according to the Monocle style gurus, it is more “authentic.” Old industrial buildings are given new life by creative spirits – thus the former AEG electric company building, the Edison-Höfe, has become home to an internet company. The brewery on Ackerstraße houses the posh Maxwell restaurant. There is action on the Bergstraße, galleries on the Gartenstraße. A Schnitzel mecca has been established on Schröderstraße (which always sounds as if it should be sponsored by Gazprom).

It is cheaper than SoTo. There is a bit of greenery, a bit of urban decay – the perfect 1990s mix.

Let me set the Monocle editorial staff on the right path before their supposedly inside knowledge leads to an invasion of people in skinny jeans and tall boots, before NoTo surrenders, as Kollwitzplatz has, to the café au lait-isation of another harmless city corner. NoTo may well get its ateliers and tantric yoga studios – but it is also about to get the BND – short for the federal intelligence service. And surely there is nothing more likely to kill a potentially interesting district than the presence of 4,000 spooks. Think NATO, not NoTo.

They were supposed to move in this year from their current headquarters in Pullach, Bavaria. But naturally – this being a publicly financed project, the biggest federal building site since reunification – it may take until the winter of 2013 before they set up shop. But it’s not too early to be frightened by Spy City.

It’s huge. Spanning the length between two metro stations, the ten-hectare complex of Lego buildings is estimated to cost close to €2 billion by the time it is finished. Plans keep getting changed, and all the building work, especially the plastering of the walls, has to be watched over by private security men. Two builders, one guard. In case someone tries to put in a bug.

The architects say it will be the biggest, most modern secret service headquarters in Europe. Compare this behemoth to the British intelligence headquarters in London, nicknamed “Babylon-on-Thames,” which cost a mere €800 million. Plainly, the BND wanted bigger and better. Let’s hope the quality of its intelligence improves too.

But why the gigantism? Aren’t spy services supposed to be discreet? The reason cannot be to transform the economy of Berlin. Yes, 4,000 extra civil servants and their families will no doubt boost the profits of Rewe and Netto, but they are not exactly what economists call a “multiplier.” They will not generate further jobs.

Try walking down the Chausseestraße side of the BND building. It is full of boarded up buildings, because of course the spies are not keen to have bustling street cafes facing their main entrance. Or tourists with cameras. So the Viva Mexico restaurant is dead, having served up its last breakfast burrito. The pub that used to serve Kaiserpils is just a wreck. A sign outside a smashed-up factory announces space for rent but it looks a bit half-hearted. The only life I saw there this week was two pit bulls trying to rip out each other’s throats.

Some business is admittedly being attracted by the prospect of BND agents in the neighbourhood. A massage place, 15 minutes for €8, is ready to knead the tense shoulders of those engaged in the war against terror. A so-called Edel-Cafe, or “classy cafe,” serves breakfast at €2.80, suggesting that NoTo residents do not exactly see the agents as a cash cow. There is the Old Shanghai as an alternative to the BND canteen. And a photocopying shop, convenient perhaps for BND secretaries smuggling documents to sell to the waiters from the Old Shanghai. And that’s about it.

The fact is that NoTo is a wasteland, and despite the best efforts of Monocle magazine, is destined to remain so. Believe me, not everyone wearing sunglasses and a trench coat around the Chausseestraße will be cool.

Most of the agents and their families did not want to leave Pullach for NoTo, and I see their point. Pullach may be a bit tainted by the Cold War, but it is a pleasant enough suburb with good schools and within easy reach of central Munich. By contrast the nearest metro station to the new BND headquarters is Schwartzkopfstraße, which has been a junkie hangout for years.

There is no logic behind this move, except a faster trip to the Chancellery for the BND’s chief. It does not help Berlin – on the contrary it adds another potential terrorist target to an already long list. It does not make the city more glamorous; it does not fit into any marketing concept (“Be Berlin: Be BND”) and it does not create meaningful jobs for non-spies.

Nor does it better inform the government. Intelligence services function better when they are decentralised, when politicians do not sit on their shoulders. It is too late to stop this stupid move – the buildings are up – and I am just amazed that Germany has the €2 billion to spare for this Pharaonic project.

The head of the BND, Ernst Uhrlau – who will, happily for him, retire before his new office is complete – declared at the topping out ceremony last year: “We won’t be a totally normal neighbour, but an affable one.”

Why doesn’t that statement reassure me?