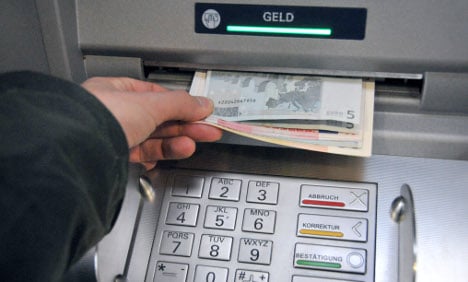 “We are still far from an acceptable level for charges,” Frank-Christian Pauli, of the Federation of German Consumer Organisations, told Thursday’s edition of the Süddeutsche Zeitung daily.

An online consumer survey by the site biallo.de of 262 German banks found that the average cost of using a non-affiliated ATM had fallen to €3.93, around €1.70 less than it was before the new regulations.

Sparkasse top the list of charges, with an average withdrawal price of €4.40, although these also vary wildly depending on which regional division of Sparkasse customers bank with.

The highest fees are at branches of Sparkasse Anhalt-Bitterfeld, which continue to charge as much as €10 for a withdrawal.

Charges from the co-operative banks have sunk by an average of €2.90, but again prices vary throughout Germany. The cheapest is the PSD Niederbayern-Oberpfalz Bank, although at €1.89 there is little difference with the €1.95 standardised price from the CashGroup (Postbank, Deutsche Bank, HypoVereinsbank, Commerzbank).

“Two euros should be the maximum, when you consider how little this actually costs the banks,” Pauli said.

The cost to the banks is between 30 and 70 cents per transaction, he said.

Pauli was similarly unimpressed by banks’ adherence to the new rule that they must display the charge for non-affiliated withdrawals.

“At most banks you only see the charge after you’ve entered your card, PIN and withdrawal amount,” rather than as soon as you enter the card, he said.

Horst Biallo of biallo.de told Süddeutsche Zeitung he expected prices to drop further, particularly in regions where one bank dominated.

“In places where there is high competition, the pressure has increased on banks as customers can now compare prices for different ATMs,” he said.

The German Competition Commission, the Kartellamt, has stated it will be observing the situation closely in the coming months.

“We are keeping watch particularly in rural areas, where prices are still yet to significantly change,” said the head of the commission, Andreas Muth.