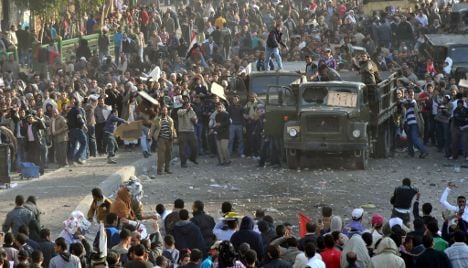 “I am very worried about he escalation of the situation in Cairo. Bludgeoning demonstrators with violence is under no circumstances acceptable. Egypt is going through a historic moment and this must take place peacefully, both inwardly and outwardly,” he told Thursday’s edition of daily Passauer Neue Presse.

“The Egyptian government must be prepared to lead a dialogue with those who are demonstrating for change and freedom.”

British broadcaster the BBC reported that five people had been killed in the violence, and 836 taken to hospital with injuries. Gunfire had rung out in downtown Cairo overnight and Molotov cocktails had been thrown.

What was now needed was to create a process of peaceful change and prevent escalation and further violence, Westerwelle said.

“Because we don’t want fundamentalists, extremists and religious radicals to end up the winners in the freedom movement in Egypt,” he said. “But they will if you quash the demonstrators with violence.”

Westerwelle also pleaded with holiday-makers still in Egypt to take seriously the advice given by the Foreign Ministry.

“It’s true: in resort areas it has not reached the stage of serious danger to German tourists. But the developments in Cairo are dramatic and the impact of the country is very hard to predict,” he said.

The ministry was doing its best to help all Germans who were trying to get out of Egypt, especially the big cities such as Cairo and Alexandria. Many German holiday-makers remain in areas such as the Red Sea coastal resorts, to which the protests and violence have not spread.