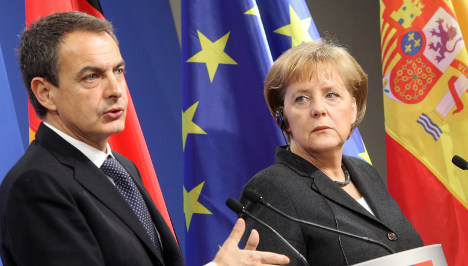 Merkel’s meeting in Madrid with Spanish Prime Minister Jose Luis Rodriguez Zapatero comes on the eve of a European summit in Brussels to discuss how to bail out crisis-torn member states.

Berlin wants to broaden the agenda to include discussions about a deeper harmonisation of economic policies, officials there said.

Merkel has called for co-ordinated tax, wage and social policies to which EU member states must agree before Germany signs off on additional guarantees for the European Financial Stability Facility (EFSF), the fund on which crisis-struck eurozone members can draw upon for support.

Zapatero, whose government has fought off fears that it may need a rescue, threw his support behind Germany’s “competitiveness pact” for Europe in comments to the German press published Wednesday.

“The mere fact the project has been floated and that big countries Germany, France, Spain and Italy are fully behind it, will create more market confidence than this whole debate over the size or flexibility of the rescue fund,” he said.

“I will speak to Angela Merkel about this on Thursday,” he added, describing his joint meeting of the German and Spanish governments as “perhaps the most important for years.”

Under the pact, corporate taxes would be harmonised across the EU, wage costs would be co-ordinated to ensure stable financing for pensions and the recognition of professional qualifications would be sped up to increase labour mobility.

There have also been calls to make changes to the EFSF to allow its lending capacity to rise to the full €440 billion for which eurozone states have provided guarantees, which may be needed if more nations, especially a large one like Spain, follow the lead of Ireland and Greece and seek aid.

Zapatero and Merkel were to give a joint news conference at 2:30 pm after their talks.

The Spanish government signed on Wednesday a “grand social pact” with unions and business groups on sweeping reforms to revive the economy and cut a jobless rate of 20.3 percent at the end of 2010, the highest in the industrialised world.

It also establishes the “basic principles” of a reform to Spain’s collective bargaining system, which ensures joint wage rises across sectors and industries.

The deal is critical to Spain’s campaign to convince the markets that it can push through difficult labour reforms so as to speed up the economy, cut spending, and finance the debt and avoid the need for a bailout.