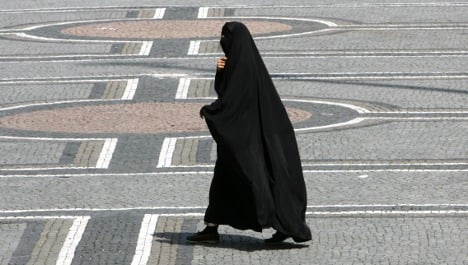 The decision was made by Interior Minister Boris Rhein in response to a worker at a local administrative office, or Bürgeramt, in Frankfurt who wanted to report for work wearing a burka.

The woman is just finishing a period of parental leave but has been given some extra time to reconsider her position.

“We have allowed her a couple more days to think about the situation,” said Frankfurt city head of personnel Markus Frank. “We want to relieve the pressure somewhat.”

The 39-year-old woman had the option of returning to work without her burka. Before she went on parenting leave, she wore a headscarf only.

But shortly before her scheduled return to work, she announced she wanted to wear a full burka on religious grounds. Daily Bild reported that there might be financial issues involved, as there had been discussion of a €40,000 settlement, though the woman’s lawyer had later talked of €18,000.

However Frank insisted the woman was not due for any kind of financial settlement. Nor is she being paid at the moment, because she is a part-time worker.

“We will not pay a cent of taxpayers’ money for this,” Frank said.

The city was following the clear rule that workers in the public service must make their faces visible. Frank said he hoped that the woman would think the matter over and return to work without the burka.

“We’re giving her another chance. Either she takes it or she doesn’t,” he said. “That is a clear limit that we are sticking to.”

Interior Minister Rhein said the state government was on safe legal ground because public service workers were obliged to be politically and religiously neutral. Veiled women conveyed the image that was not consistent with liberal and cosmopolitan values.

“What’s more, the burka can be understood as a sign of an attitude contrary to the values of the western world,” said Rhein.

“We regret the fact that it’s actually come to this debate because this abstruse interpretation of Islam by the city employee shows an image of Islam that has nothing to do with the views of almost all Muslims in Germany,” said Mürvet Öztürk, the integration policy spokesman for the party’s parliamentary group in the state.