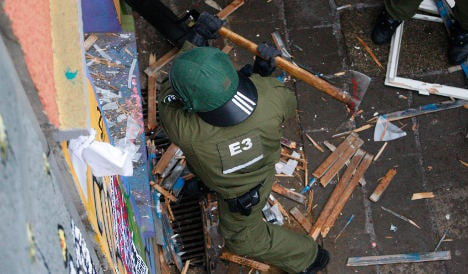 Police cordoned off a large area of several blocks around the occupied building at Liebigstraße 14 in the Friedrichshain district, which has become a lightning rod for the capital’s gentrification battle.

One of the injured police officers needed to be hospitalised. Authorities arrested some 23 activists protesting on the streets against the eviction on public disorder charges.

Suspected left-wing radicals hurled bottles and other missiles at police.

Police said that about 300 protesters gathered near the building, which has been a squat, and later a housing project, since 1990, shortly after the Berlin Wall fell. Some 2,500 police were deployed for the operation.

Long lines of police vans were parked in surrounding streets and dozens of officers formed barriers to seal off the residential blocks on every side of the house.

Police forced their way into the building in the morning. The residents had previously vowed they would refuse to leave the building voluntarily.

A police spokesman said the officers had faced massive barricades at the entrances to the building. Several hundred police were involved in actually carrying out the eviction.

The residents failed on Tuesday in a last-minute effort to have the eviction declared illegal by a Berlin court. The capital’s Interior Minister Ehrhart Körting had called on the residents to leave the building peacefully.

Friedrichshain is one of the key flashpoints in the battle over the gentrification of Berlin, which pits property developers and investors against mostly left-wing residents. Although Liebigstraße 14 had been occupied as a housing project with a legal rental contract, it was bought from the city by private owners in 1999, who cancelled the lease in 2007.

After two years of legal wrangling, the residents were given an eviction order in November 2009.

The 25 current residents are a mix of Germans and foreigners, and of workers, students and artists. They argued the eviction was illegal because the notices served were out of date and applied to previous residents of the house.