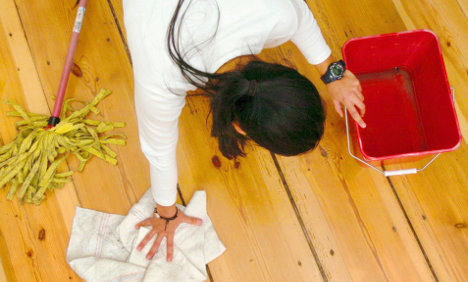 She is the magician who transforms a stale and dusty bedroom littered with dirty clothes into a restful place at the end of the day.

The sparkling toilet bowl and shiny taps, the lack of hair in the shower sink drain are all thanks to her.

They are generally silent, this army of women who clean, iron and polish. But now the memoirs of one Polish cleaning lady are the talk of Germany.

A best-selling book, “Under German Beds” (Unter deutschen Betten), has shocked, provoked and amused in almost equal measure, as the cleaner-turned-author exposes the chaos, dirtiness and downright filth – in all meanings of the word – of some German households.

Writing under the name Justyna Polanksa, the 31-year-old from Poznan says she hopes the book will inspire people to treat their home help with more respect.

“I had one man call my number and ask whether I would be wearing red underwear when I came to do the cleaning. Others call and ask where I am from and then call me a shit Polack before hanging up. It is no way to treat anyone,” she told The Local.

In her book, she writes of the casual xenophobia she encounters every day, as well as the sexism and the disdain many customers show for cleaners.

“Sometimes men seem to think they pay me €30 to clean their house for three hours and show them my breasts too,” she said.

Polanksa came to Germany 11 years ago, arriving in Offenbach near Frankfurt to look for work as an au pair. Although she got a job looking after a family, she soon decided cleaning would suit her better.

“Cleaning was not my dream job, but if you don’t have the language it is one of only a few options. My German at the time was not good enough to work in a shop for example,” she said. “I thought I would do it for a couple of years just to make some money, but here I am still doing it.”

She had – and still maintains – dreams of becoming a beautician, but these have been put on hold until she can raise the funds for training.

This effort will certainly be helped by the publication of her book and the interest it has attracted. The appeal lies in the sharp tone she sometimes employs – as well as her tales of the more icky things she found under German beds.

The freshly-extracted molar tooth was fairly unpleasant, as was the mummified pet hamster.

“The worst thing I found? I suppose that would be either the used tampon, or the used condom. I mean what were these people thinking? I don’t know whether people forgot to dispose of them or if they thought the cleaner was coming anyway,” she said.

But what frustrates her most is that some employers simply make her work more difficult.

“Chaos, chaos, chaos,” she said. “I sometimes cannot get to the floor because it is covered in things. Or you go into a kitchen and there is three days’ worth of dishes there. I have three hours or so to do the place, and cannot do it properly if it is in chaos.”

Polanksa had expected the celebrated German virtues of organisation and cleanliness, but was shocked by the disorder and dirt she found in many homes she cleaned.

The real eye-opener is the reaction to her pulling back the curtain of Teutonic domesticity. There have been comments on websites urging her to return to Poland if she does not like it here, or accusing her of being ungrateful. And the biggest surprise has been the reaction of Polish commentators.

“There have been many comments from Germans and many of them find it very funny, while many are upset. But those from Poles have been the worst.

“They say, because I have married an Italian man, that Italians are more dirty, or that English people are really bad. I don’t know, perhaps Poles are worse; I have only worked as a cleaner in Germany. That is what I know.

“I have written my story and expressed my opinion. It is not against German people, it is simply what happened to me. All I want is people to treat me and others with more respect and humanity.”

Currently the best-selling German book on Amazon, the book is being considered for translation not only into English but Polish too.

Polanksa is still working as a cleaner, fitting in interviews about her book around her regular commitments with a mop and a duster.

“I quite like it. I clean quite a lot at home too. My flat is really clean and tidy – I will never be as bad as those people in the book,” she said.