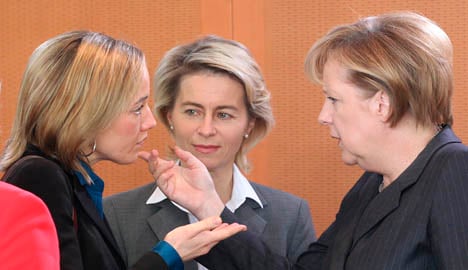 The two ministers, who are among the most powerful women in the country, both support a quota but are divided on whether it should be mandated or voluntary. Chancellor Angela Merkel, meanwhile, steered clear of taking a firm position.

Von der Leyen said an enforced quota that would require German companies to have women in 30 percent of all executive positions was long overdue.

“A time line for building a legal framework must be created this year,” von der Leyen, of the conservative Christian Democratic Union, told broadcaster NDR.

“In terms of the number of women occupying executive positions, Germany is currently at the same level as India and behind Russia, behind Brazil, behind China. In other words, the time has come for things to change in our country, too.”

That put her at odds with fellow CDU member Schröder, who favours allowing companies the flexibility to set their own quotas, a position also maintained by junior coalition partners the pro-business Free Democratic Party.

Schröder told broadcaster ARD on Monday: “I would like a law, but not one that attempts to cover every corporation from the steel industry to the media and communications in one fell swoop. I want a law that distinguishes between different corporations. That’s why I recommend a flexible quota that allows each corporation to set its own standards.”

Specifically, Schröder said she wanted to “legally require corporations to establish their own quotas and achieve them within two years. To this point, companies have been free to leave quotas unfulfilled, since they are not stipulated by law.”

With a legal framework for quotas, corporations would be “under pressure to justify their practices from now on,” Schröder said.

Chancellor Merkel, for her part, has stayed mostly silent on the debate, calling it a “normal discussion process.”

Manuela Schwesig, deputy chair of the centre-left opposition Social Democratic Party, called for a quota for the number of women on executive boards of at least 40 percent.

“We want it now. We have been waiting for ten years,” she told ARD, referring to the voluntary quotas companies have adhered to for the past decade. “Of the 200 largest corporations in Germany, only 3 percent have women in executive roles. That really is medieval.”

Schwesig appealed to von der Leyen to act swiftly if she is serious about establishing a quota of 30 percent.

Von der Leyen has “blocked the quota for the past five years,” Schwesig said. “I wonder about it. She now appears to be moving in the opposite direction. We will see how serious she really is.”

In light of the number of highly-educated women in the work force, von der Leyen estimates that a quota of 30 percent is realistic for most companies, either voluntarily within two years or legally required by 2018.

“What is significant is that this movement is coming from the centre of parliament,” she said. “The women in the CDU have worked on this topic steadily for the past half year, and have produced a step-by-step plan of action.”

The FDP has dismissed the idea of a nation-wide quota of female executives at the country’s largest firms.

“In our view, there is no pressing need for action,” the party’s general secretary Christian Lindner said Monday in Berlin.

Most large corporations plan to reorganize their executive boards by 2013. This process should be delayed, according to Lindner, so decisions can be made with the “certainty of facts.” For the FDP, a fixed quota would “interfere significantly with the freedom of contracts and the personal politics of corporations.”

“While in certain companies the goal of having women in 30 percent of executive positions seems possible, other sectors will have trouble achieving even a fraction of that goal, and even that will require committed effort over many years,” said BPM president Joachim Sauer.

The European Commission is also in favour of promoting more women to executive positions.

“I am open to the idea of establishing quotas for women in executive positions at, for example, the large, publicly traded corporations,” the commissioner of domestic markets, Michel Barnier, told the Süddeutsche Zeitung Monday. Barnier said it was not just an issue of fairness, but also something that could lead to more well-balanced decisions.