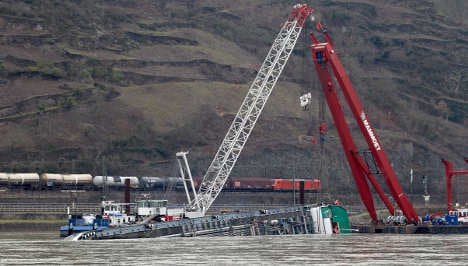 Some ship owners are threatened with bankruptcy as their vessels are prevented from travelling past the wreck of the Waldhof near the famed Loreley rock.

They are instead stuck upriver of the accident site, either at Ludwigshafen or Mannheim. “We have not experienced such a situation for decades,” said a spokesman for ship owners.

Efforts to salvage the chemical tanker are proceeding only very slowly, with the down-river passage of the Rhine expected to be closed to traffic for at least another week.

Experts were busy drilling into the seven tanks of the 110-metre-long Waldhof at the weekend to pump out the sulphuric acid it was carrying when it hit trouble on January 13 and turned over, killing two crew.

The cause of the capsize is still not clear.