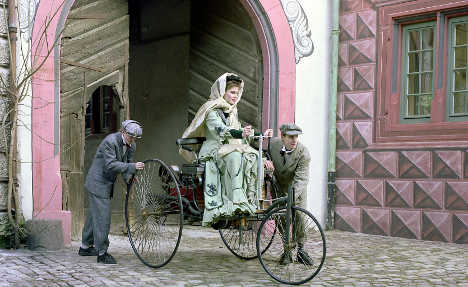 Perhaps no invention has changed daily life as much as the automobile. It has transformed modern society and has become an integral part of Germany’s industrial prowess.

But in the beginning, it was not just another joyride.

People scoffed at the first modern car, a three-wheeled contraption with a stinking, noisy single-cylinder engine. When Carl Benz established a patent for his vehicle on January 29, 1886, it was unclear what the device’s primary purpose would be. Benz languished as his vehicle stood idle in a garage, seemingly without use.

Benz remarked later on the combination of wonder and derision with which his invention was met.

“The astonishment and admiration easily reverted to pity, mockery and scorn,” he said. “Why would one get into a dingy, unreliable and noisy box of a machine when there are perfectly good horses all over the world?”

Amid the scepticism, it took an extraordinary event to unlock the automobile’s true potential.

In August 1888, Benz’s wife Bertha snatched up the couple’s two teenage boys in the calm of morning, slipped into the car and drove from Mannheim to her mother’s home in Pforzheim, 100 kilometres away. It was the first motorised long-distance journey in history, a seminal road trip, and an adventure that changed the very idea of personal transportation.

But Mrs. Benz required every bit of her husband’s pioneering spirit to complete the arduous journey.

After 45 kilometres, the machine ran out of fuel. In the 1880s engines ran on ligroin, a substance commonly used as cleaning fluid. When Benz found a pharmacy in the town of Wiesloch, she bought two litres, far more than necessary for its ordinary function, leaving clerk Willi Ockel flabbergasted and unaware that his shop would be remembered as the world’s first gas station.

The travellers also had issues with the cooling of the motor. They refilled the cooling tank at every opportunity – at roadside inns, fountains, and drainage ditches. When there was a slope to climb, Bertha and her sons got out and pushed the car. Moving downhill was no less adventurous, as the brakes lagged and wore down quickly.

But Lenz, a pragmatist to rival her husband, found solutions to many of the automobile’s glitches.

On the drive back to Mannheim she had leather fixed to the brakes to prevent wear. She unclogged the fuel duct with a pin from her hat, and fixed the fraying ignition cable using a piece of her garter.

When Bertha later returned successfully to Mannheim, the future of the automobile looked considerably brighter. It finally had some relevance to people’s daily lives.

“But the journey of Bertha Benz was the initial spark that set in motion the idea of daily motorised mobility,” he said. “She gave wings to the fantasies of the early inventors and countless others.”

Without the journey taken by Bertha Benz and her sons, our world might look very different indeed.