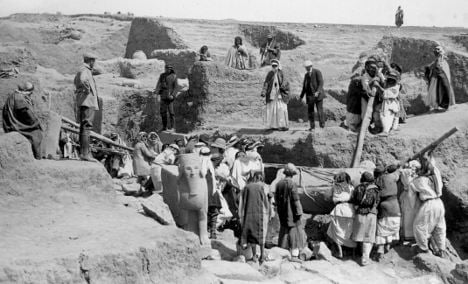 The story kicks off nearly 100 years ago when Max von Oppenheim, the son of a rich German banker, fell in love with the Middle East as a diplomat keeping an eye on British empire-building.

He stumbled across the ruined palace of an Aramaean king, buried in the desert, as German engineers toiled on the nearby Berlin to Baghdad railway line along what is today the Turkish-Syrian border.

Some statues were damaged during fighting between French and Turkish troops at the end of World War I. One goddess-like figure had her pleats and nose chopped off with an axe.

But much worse was to come.

The museum was bombed in November 1943 and all artefacts made of wood and gypsum were burnt to cinder. Only the basalt rock statues survived the inferno, but cold water used by firemen fractured them nearly beyond repair.

“The whole museum reached temperatures of over 1,000 degrees Celsius,” said Kirsten Drüppel, an expert at Berlin Technical University’s department of mineralogy involved in the restoration.

“And then it was suddenly cooled down with water and this put severe stress on the stones, which just exploded.”

The fragments were recovered from the ash, but then disappeared for more than 50 years into the dark cellars of a museum in communist East Berlin, half-forgotten until the collapse of the Berlin Wall in 1989.

In 2001 the painstaking work of restoration began. It then took nine years of detective work to fit together most of the 27,000 pieces of this giant 3-D puzzle, and breathe new life into some 60 priceless artefacts.

“Some 90 percent of what could be saved has been restored,” Beate Salje, head of ancient Near East section at the Pergamon museum, where the treasures go on display, told a press conference.

Some pieces were as small as a fingernail, others weighed one and a half tonnes. One of the statues, a goddess, was broken into 1,800 pieces. One of the restored lions is made of 900 fragments.

“The work of restoration was never wearisome or a pain. It’s the sort of work that requires a lot of effort, but it’s what you dream of doing when you are an archaeologist,” said curator Lutz Martin.

The exhibition, “Rescued Gods of the Palace of Tell Halaf,” is open to the public until August 14. The Pergamon on Berlin’s central Museum Island is expected, at some future date, to be made its permanent home.

In the meantime, the exhibition might tour the United States, Britain, and France, said Salje.

Von Oppenheim died a broken man in 1946, but “he always believed it might be possible to restore his statues,” said Michael Eissenhauer, director general of Berlin’s state museums.

“It’s a miracle,” he said. “For years, no one could imagine such an exhibition would ever be possible.”