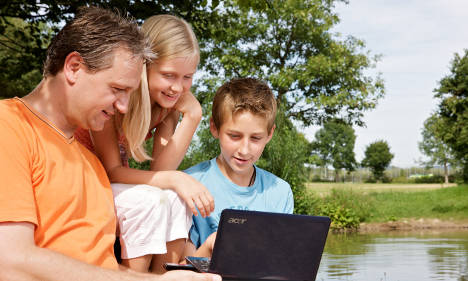 What we don't know, can't hurt us, right? Photo: DPA

Less than half of those who describe themselves as competent internet users are guarding their personal data with anti-phishing or browser protection software, the survey commissioned by Deutsche Telekom found.

Just one-third of those who claimed minimal online competence said they browse the web with protection.

The survey found web surfers using mobile devices to be especially negligent, with only one-quarter subscribing to virus protection on their smartphones, and only 18 percent using a firewall. However, the fact that not all mobile operating systems support firewalls and virus protection is likely party of the low rate, the survey noted.

The widespread admissions of disregard for security came although half of internet users said they had already experienced the inconvenience of hostile software in the form of a virus or worm. Ten percent also said they had fallen victim to online shopping scams.

“Because the internet is so easily accessible from nearly everywhere, some users fail to take the necessary precautions to protect themselves,” Telekom data protection officer Claus-Dieter Ulmer said, urging internet users to take more notice of their online safety.

But on the whole, Germans appear to at least recognize the dangers of the web, the study found.

Some 93 percent reported equipping their PC or notebook with virus protection software, and 81 percent said they had a firewall.

Only two percent admitted to having made no provisions at all for online security.

Meanwhile 61 percent of internet users said go online at least once a day and just under 50 percent are online several times daily.

Data protection has been a contentious issue in Germany in recent years, with internet giants Google and Facebook bearing the brunt of criticism from wary politicians and advocacy groups.

Partially as a result of the egregious invasion of privacy under former Nazi and communist regimes, Germany has some of the strictest data protection laws in the world.

Some 1,604 internet users participated in the online survey conducted by TNS-Infratest for Deutsche Telekom on the occasion of the European Data Protection Day on January 28.