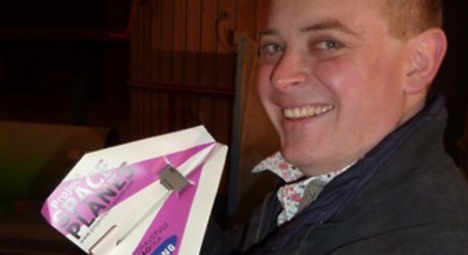 The “Project Space Planes” team led by Joel Veitch, a British musician and web-animator, used a helium balloon to transport the planes as high as possible, in an effort launch them “from the edge of space,” according to the group’s website.

The planes were released into the upper atmosphere on Tuesday and the project’s website says there have been “unconfirmed discoveries of planes in places as near to the release site as Bremen and Minden, Germany and as far flung as South Africa and America.”

Each plane carries a digital memory card made by the South Korean electronics firm Samsung, on which a member of the public has recorded a greeting message to anyone who finds the planes.

Although the team is British, they used an area near Wolfsburg in Lower Saxony as a launch site because unlucky weather patterns meant most of the planes would have landed in the English Channel had they been launched from the UK.

The balloon was filled with 7,815 litres of helium gas and climbed to an altitude of 37,339 metres – about three times the altitude at which a commercial passenger plane flies – before it burst and fell back down to earth. The team found the remains of the balloon about 300 kilometres from the launch site, lodged in the upper branches of a tree near Schönwald in the Spreewald area south of Berlin.

The balloon took a little over two-and-a-half hours to reach its maximum altitude, at which point it released the balloons into a thin atmosphere and temperatures of about -50 degrees Celsius.

Despite the project’s name, space is, strictly speaking, another 60 kilometres or so higher. But 37 kilometres was the maximum altitude feasible because the atmosphere thins as one ascends, meaning the balloon would inevitably burst.

This moment was captured by a camera on board. The planes were then released from a kind of net in which they’d been held.

The Japanese origami artist Takuo Toda raised the idea several years ago of launching paper planes from the International Space Station, which orbits earth at about 400 kilometres. Naturally this would be considerably more complicated than the present project, and therefore has not moved past the inspiration stage.

Samsung got involved in the project as a marketing ploy to show how tough its memory cards are.

Veitch, the front man for the project, was helped by high-altitude ballooning expert Robert Harrison and plane designer Andy Chipling, among others.

Project Space Planes urged residents of Germany to keep an eye out for paper planes landing.