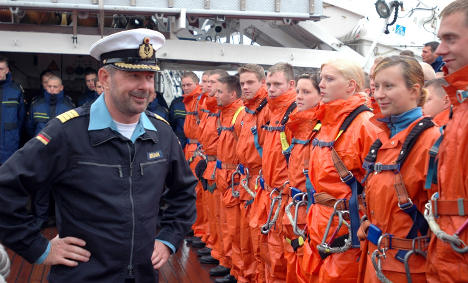 The incident supposedly occurred in 2004, when cadets had just set sail out of the Arrecife port on the island of Lanzarote.

An officer announced: “Two messages! The good news first – everyone gets an extra beer. The bad – our captain wants to go water skiing today.”

A cadet on board the ship at the time told Bild that sailors had to refurl the ship’s sails at no small danger to themselves to satisfy his whim.

“Our commander absolutely had to go water skiing,” he said. “He went down with the long boat and then rode repeatedly for about 20 minutes. We were all stunned.”

The now 55-year-old Brühn, who captained the ship between 2001 and 2006, also ordered cadets not to photograph the private foray, but Bild published photos allegedly taken that day.

The news came after Defence Minister Karl-Theodor zu Guttenberg relieved Schatz of his duties over the weekend, replacing him with Brühn as embarrassing details about conditions leading up to and after the death of a women cadet in November continued to come out.

On Tuesday a report by Hellmut Königshaus, the German parliamentary liaison to the military, highlighted allegations by former cadets who said that instructors were involved in heavy drinking and sexual assaults, in addition to subjecting naval trainees to humiliating drills.

But Bild‘s report suggests that the cavalier behaviour by the ship’s officers goes back even further.

Defence Minister Guttenberg faced the parliamentary defence committee on Wednesday to answer for the sailor’s death – which led to what has been described as a “mutiny.” He was also questioned about the accidental shooting of a soldier in Afghanistan and the mysterious opening of soldier’s mail from the front there.

Opposition leaders have accused the minister of scapegoating the Gorch Fock commander Norbert Schatz to distract from his own failure to shed light on the circumstances surrounding the sailor’s death, while also allowing misinformation about the shooting death in Afghanistan to spread.

Guttenberg admitted a breakdown his ministry’s attempts to clarify the scandals, but denied accusations of a cover-up.

The charges against him had “fallen in like rotten roof beams,” he said during the committee meeting.

Guttenberg admitted to providing Bundestag members with an “incomplete” report of the 21-year-old Bundeswehr soldier’s shooting death in Afghanistan – which was initially characterised as a suicide, but may have resulted from an apparent game involving the weapon.

Though issuing an incomplete report “should not happen,” the mistake was corrected last week, he said. Guttenberg also insisted that he had told journalists on December 18 that the soldier had likely died of external causes.

Meanwhile a team of investigators is to arrive on the Gorch Fock on Thursday evening at the southern Argentina port of Ushuaia. They have orders to probe charges that officer bullying may have led to the death of 25-year-old Sarah S., who fell 27 metres to her death from the ship’s rigging late last year, the Defence Ministry said.

The ship has been ordered to return to Germany.