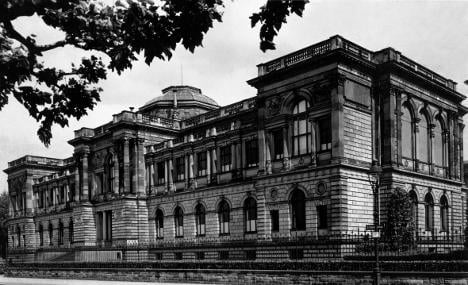 Artworks previously stolen and looted by the National Socialists before and during the Second World War are frequently restored to heirs by museums. But the respected Städel Museum this year became the first to publish a book on its own ties to Nazi seizures.

Museum in Widerspruch, or “Museum in Conflict,” details what it called the institution’s “contradictory development” under the totalitarian regime.

For example, while officials there felt they could not prevent the confiscation of large quantities of so-called “degenerate art,” they did not refrain from publicly expressing that it was a great loss. Meanwhile private collections in danger of being seized by the Nazi party were secretly stored by the museum.

The detailed book is a new benchmark that other museums hope to emulate.

Nazi confiscation of modernist “degenerate art” has been well documented by German museums, but research of museum involvement has been “universally bad,” according to art historian and book co-author Uwe Fleckner.

“At the beginning one was mainly preoccupied with the paintings,” deputy director of Wuppertal’s Von der Heydt Museum, Antje Birthälmer, said of looted Nazi art. “Only slowly have we thought about illuminating the background.”

Director of the Wallraf-Richartz Museum in Cologne, Andreas Blühm, called the new efforts by the Städel Museum a trailblazing example to the rest of the country’s art establishments. The museum now also plans a similar study of its own past.

Some 100 people across Germany are currently concerned solely with provenance research, compared to just about 10 a decade ago, says another expert, art historian for the Bavarian State Picture Collections, Andrea Bambi.

“Germany has done quite a bit in the area of rehabilitation in the last years,” she said.

Art museum officials in Hamburg, Stuttgart, Hannover, Karlsruhe and Essen all said they were currently working on their own research and would like to incorporate their own museums’ part in the dark history into the research.

But Stuttgart in particular may find this a challenge, “because we suffered a total loss of files between the time of 1933 and 1945,” Director Sean Rainbird said.

While the research may be painstaking, “Museum in Conflict” co-author Fleckner said it remains essential.

“Bit by bit, artwork by artwork, they must be meticulously examined,“ he said. “We can’t come to any blanket judgements.“