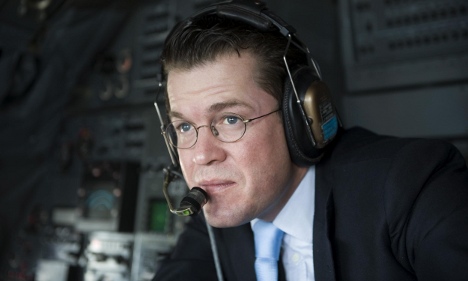 The popular and aristocratic Guttenberg relieved the commander of the Gorch Fock navy training ship from his duties over the weekend, as embarrassing details about conditions leading up to and after the death of a woman cadet in November continued to emerge.

The minister is also under fire for two other military scandals, including the accidental shooting death of a soldier in Afghanistan and the unexplained opening of soldiers’ mail from the Afghan front.

Opposition leaders have accused the minister of scapegoating the Gorch Fock commander Norbert Schatz to distract from his own failure to shed light on the circumstances surrounding the sailor’s death, while also allowing misinformation about the shooting death in Afghanistan to spread.

Guttenberg responded angrily on Monday, calling his critics “clueless.” But on Tuesday some commentators warned that such disdain would create enemies, while others said they saw signs that the slick Guttenberg may be acting out of self-preservation as he loses control of his ministry.

The editor of centrist daily Der Tagesspiegel warned Guttenberg that his sharp tone in the face of criticism could be dangerous for him.

“Mr. Baron should watch out,” he wrote. “Not everyone who disagrees is therefore intellectually challenged, or ignorant of the regulations and military law.”

In fact, Guttenberg himself could be accused of such ignorance for not first summoning Gorch Fock commander Norbert Schatz to Berlin to hear his side of the story before relieving him of duty, he added.

Sending the ship’s previous commander to resume his post was also ill-advised, he said.

“The conditions bemoaned on the ship didn’t begin yesterday, but long ago,” he suggested. “Thus the reasons had better be very good.”

Otherwise the troops will resent the minister, he wrote.

Right-wing daily Die Welt said that while the recent scandals in the military reveal communication failures within the Defence Ministry, Guttenberg risks losing his authority if he admits this.

“Hardly a defence minister has left the post undamaged. The exceptions so far were Helmut Schmidt and Volker Rühe. Both acted under the motto ‘my word is law’,” the paper wrote. “Karl-Theodor zu Guttenberg can now show that he too has the necessary strength to ride the bull he mounted.”

But Guttenberg’s choice of words when he suspended Schatz left the impression that he wanted to appear pithy, rather than decisive, the paper said. It was also clear that he was not in control of his ministry, it added.

“It’s true that the information on the far-away ‘Gorch Fock’ was initially conflicting. But it’s also true that the ministry must pay the consequences that threaten when the minister is not immediately and comprehensively informed. Otherwise the minister fails.”

Meanwhile financial daily Handelsblatt criticised Guttenberg for doing little to quell rumours about the different scandals within the German military as anger grows in parliament.

“The minister has repeatedly not asked what was going on in crisis areas – neither on the Gorch Fock, nor in the death of the soldier. Instead he allowed his inspectors and general inspector to circulate false messages,” the paper wrote. “And that is despite the fact that there were clear conclusions in investigations of both cases. As with the Kunduz affair, Guttenberg was either falsely briefed or didn’t concern himself with the bad news.”

Guttenberg has also kept officials on staff who have shown themselves to be untrustworthy in the past, the paper said.

“Guttenberg obviously can’t count on his ministry,” it wrote. “But his indifference over the frightful conditions behind the false messages will soon catch up with him. Because on his hardest front, the parliament, resentment over his behaviour is growing immensely.”

The centre-right Frankfurter Allgemeine Zeitung argued that Guttenberg was suffering the revenge of a political system he has bucked. Guttenberg has cultivated the image of an outsider who is intellectually and – given his enormous wealth – materially independent of the party machine.

He is thus able to focus his attention directly on the people – and has therefore been able to define himself as a modern “tribune of the common people.” As the paper noted, this makes Guttenberg “a little like (former president Horst) Köhler, only smoother and smarter.”

This has frustrated CSU colleagues who had kept their heads down and worked their way up the ladder only to watch him sail past. Now the system is “striking back,” the paper wrote.

“Not even a super-Guttenberg … could please his critics in this situation.”

That said, Guttenberg runs the risk of relying too heavily on his popularity to get through the current scandals. The suspension of the Gorch Fock’s captain – despite Guttenberg’s assurances that there would be no rush to judgement – could be seen as self-protection, the paper said. He also risks alienating sections of the military whose support he needs in his historic reforms of the armed forces.

The centre-left Süddeutsche Zeitung wrote that the defence minister was once again showing he was the “master of self-defence.”

It’s understandable that in a crisis situation, a minister wants to act quickly and be seen to be decisive. Yet Guttenberg’s hasty displays of concern and toughness were self-serving. He stressed that the buck stopped with him – only to let military officials carry the can in the defence committee for communications failures after the fatal shooting of the soldier by a comrade in Afghanistan.

“The decision to remove (Gorch Fock) Captain Schatz also fits into this picture,” the paper wrote.

Schatz had a reputation as a tough but highly regarded officer. Life on a navy training ship is not supposed to be easy. Clearly, degrading rituals in the military needed to be investigated, but Guttenberg showed signs that he was interested only in protecting himself, the paper said.

“One would have wished that the minister look somewhat more closely at what actually happened on the Gorch Fock.”

Guttenberg’s self-protective instinct had left the military under general suspicion. The inspector-general of the military was left with the job of scouring the armed forces for examples of degrading rituals, the paper said.

“One can see in Bild am Sonntag how that all affects the minister,” the paper concluded, referring to Guttenberg’s exclusive interview with the Sunday tabloid, in which he announced a broad investigation into conduct in the military. “A radiant minister is shown there with a similarly pleased editor of the paper on the back seat of the official car.”

The left-wing taz concluded that a particularly troubling revelation from the affair was Guttenberg’s closeness to the tabloid Bild, to whose Sunday edition he gave the story that he had dismissed the captain and ordered a review into military behaviour.

It may be that the captain had a case to answer, but Guttenberg’s handling would not help get to the bottom of the matter. Guttenberg decided to fire him on Friday night and immediately called the paper, it said.

“The question is not only what Guttenberg knew when, but also, to whom is the minister beholden: the parliament or Bild?” 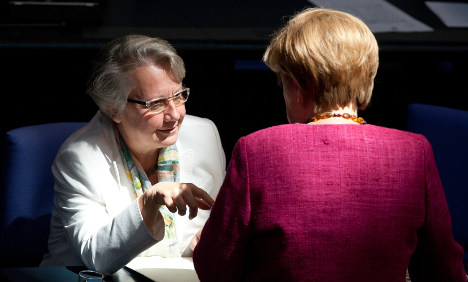 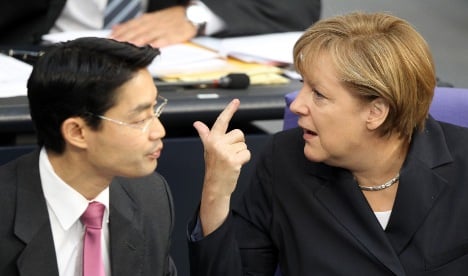 Speaking on Wednesday during a trip to South Africa, Schavan said, “I will not accept the decision of Düsseldorf University and will appeal against it. Considering the legal conflict, I ask for your understanding that I will not make any further statements today.”

The university decided on Tuesday evening after a lengthy period of consultation to strip her of the doctorate she got in 1980 for her thesis “Person and Conscience”. Technically she now only has her Abitur qualification – the German equivalent of British A levels – as she did not take a separate degree but proceeded directly to her doctorate.

She immediately came under intense pressure to resign her ministerial job, with many commentators comparing her case with that of Karl-Theodor zu Guttenberg who resigned from his defence minister job in 2011 after it was found he had copied large chunks of his doctoral thesis.

Schavan is a close political ally of Chancellor Angela Merkel, who faces re-election this September and could do without losing a senior colleague.

Opposition politicians are keen to portray her as a liability for Merkel and spent much of Tuesday evening and Wednesday calling for her resignation, particularly in view of her position as minister for education and research.

The Süddeutsche Zeitung said Schavan’s case was a borderline one – as demonstrated by the length of time it took the university to check it. “The misconduct of the current minister was more than 30 years ago. One should have taken all of this into account, have reprimanded her for the poor quotes and have been able to leave it at that.”

The paper said that with Guttenberg and Schavan, Merkel’s government has a plagiarist rate of 12.5 percent – nearly as high as the share of pages in Schavan’s doctoral thesis that were erroneous.

“The decision against Schavan sets strict standards, also for the checking of dissertations that have long been mouldering away in libraries. It may be exciting to see who many titles will fall victim to these standards,” the paper concludes.

The Berliner Zeitung said, “It is already clear that the decision does not only hit the academic reputation of Frau Schavan. An education minister who is found out to have plagiarised parts of her dissertation can hardly remain in office.”

But the paper added that the academics at Düsseldorf University, who did not bring in external examiners to look at the thesis, would also become part of the political discussion. It also said that although it is undisputed that Schavan’s work has serious academic errors, a new examination of it more than 30 years later with massive consequences for her career is questionable at the least. “If this concerned a crime it would have long exceeded the statute of limitations,” the paper said.

The Leipziger Volkszeitung pointed out that Schavan had set the bar high when she had weighed in publicly on the Guttenberg case, criticising his plagiarism. “She must now be measured against that. Angela Merkel who delayed for a long time in the Guttenberg plagiarism affair can hardly afford, at the start of the federal election campaign, to hold onto a struggling minister.” 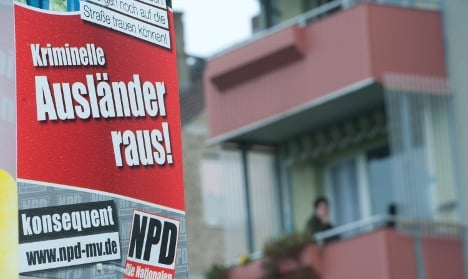 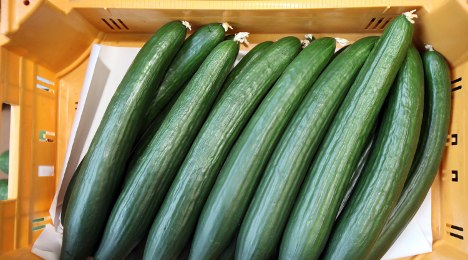