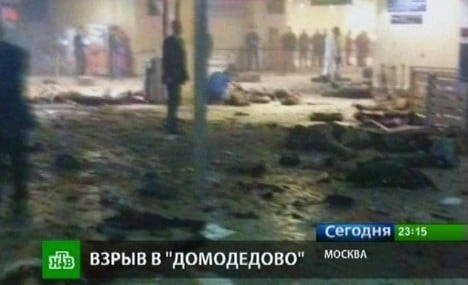 The man born in 1976 was among the first bodies to be identified, German news agency DPA reported.

Russia’s civil defence ministry has posted the names of some victims on its website, including two British citizens and a Bulgarian.

The German man was likely employed by a German firm in Moscow, DPA reported.

“Our information says that one German citizen was killed and another person with German citizenship injured,” a Foreign Ministry spokesperson said.

A German woman is reportedly in treatment at a Russian hospital.

The German man’s chauffeur reportedly found him lifeless near the Domodedovo Airport arrival gate after the explosion, which left some 180 injured, according to Russian media reports.

A Moscow doctor said identifying bodies had proved difficult due to the power of the explosion.

No one has claimed responsibility for the Monday blast, but Russian authorities believe a terrorist group out of Chechnya may have been involved. Federal Security Service agents reportedly intercepted references to a planned attack in the days leaden up to the bombing.

Islamist militants from Chechnya have been blamed for previous attacks on Moscow, including a suicide bombing in the city’s subway system in March 2010 that left 40 dead.