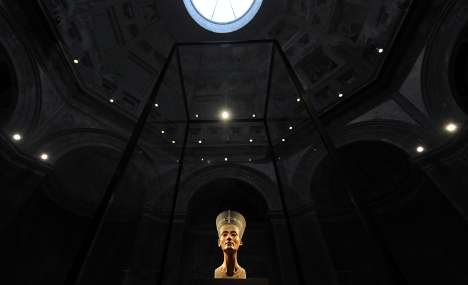 The demand was sent in a letter to Hermann Parzinger, president of the Prussian Cultural Heritage Foundation, the governing body of the Neues Museum in Berlin where the piece has pride of place, he said.

But the German government, which has always refused to return the bust,

unearthed in 1912 by German archaeologist Ludwig Borchardt, was unmoved.

He added that the position of the German government was “unchanged and not new.”

The Prussian Cultural Heritage Foundation confirmed that Parzinger had received a letter from Hawass, but said that it was not signed by the prime minister and was not “an official demand from the Egyptian state.”

It added that under a 1912 agreement, artefacts found in the dig were properly listed and photographed, showing clearly their “beauty and quality,” and then divided up between the two sides.

“Moreover, the objects were in open crates so that they could be inspected. There can be no talk of anyone being fooled,” the foundation said in a statement.

According to Egypt, Borchardt immediately realised “the unique nature and artistic quality of this piece, as well as its historical importance,” and transported the bust to Germany illegally.

Cairo began to demand the restitution of the Pharaonic-era statue back in the 1930s, but successive German governments have insisted the piece was bought legally by the Prussian state, and that there are documents to prove it.

The bust is at the top of a “wish list” of five major artifacts exhibited abroad that Egypt wants returned as part of its cultural heritage.

“Egypt recognises and appreciates the care and effort undertaken by the government of Germany to preserve and display the painted limestone bust of Queen Nefertiti,” Hawass said in a statement. But he asked that “this unique treasure be returned to the possession of its rightful owners, the Egyptian people.”

In December 2009, Friederike Seyfried, a German Egyptologist at the Neues Museum, said Cairo had often aired its demand through the media but never made an official request.