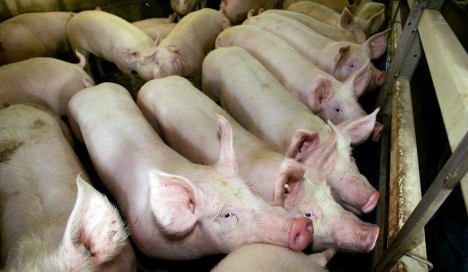 “If in the next few days the pork market continues in the same direction, we must be ready to take the measures available to us to avoid a fall in prices,” he said at the Berlin agriculture fair.

The discovery of high levels of toxic dioxin in pork from German farms has hit prices, while farmers are also suffering from a rise in the costs of cereals for pig feed.

“The German government’s measures have helped to restore confidence to the market,” said Ciolos adding that Brussels would act if these proved inadequate.

The latest scandal was caused when a German firm supplied some 3,000 tonnes of fatty acids contaminated with cancer-causing dioxins to several animal feed makers.

Thousands of farms have been temporarily closed, and traces of dioxin have been found in eggs, poultry and pork. Several countries have since banned the import of German products.

Last Saturday the president of the German Farmers’ Association (DVB), Gerd Sonnleitner, said the price producers get for pork had dropped from between €1.40 to €1.50 a kilo down to €1.12 a kilo.

French pig farmers were in an untenable situation, he said, calling for high-level discussions on the future of the industry, a move supported by Ciolos.