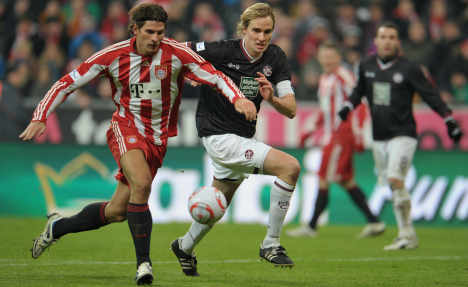 A Mario Gomez hat-trick capped the rout, and Bayern climbed from fifth to third to trail leaders Borussia Dortmund by 14 points after the league’s top side were held to a 1-1 draw at home to Stuttgart.

“I’m very satisfied, a 5-1 win in the Bundesliga is fantastic,” van Gaal said.

“But I’d like to point out how difficult it was for us … Kaiserslautern were very disciplined and we had real problems in the first half, but we scored the goals at just the right time.”

“We’re third now, but we have a lot of work ahead of us, and we need lots

Dutch winger Arjen Robben, who was making his first start of the season after injury, opened the scoring with a classy first-half goal, but admitted Bayern had to work for their three points.

“It was tough,” he said. “It was vital we scored just before and just after half-time. I’m really enjoying being back out on the field again, although my comeback isn’t as important as the team doing well.”

Dortmund had to share the points at home to Stuttgart after the guests’ Russian striker Pavel Pogrebnyak equalised in the 84th minute.

“We had several good chances when we could have scored the winner, but we

“We didn’t seem to understand that we should have defended until the end.”

Borussia had opened the scoring just before the half-time break when midfielder Kevin Grosskreutz slid a pass through the Stuttgart defence for teenager Mario Götze to beat the goalkeeper on 43 minutes.

Stuttgart fought back for a point but are still 17th in the league, second from bottom, despite the draw.