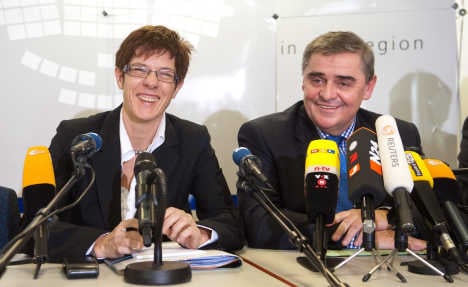 Müller has held the top post in Saarland since 1999. He officially announced his intent to resign following a conference of CDU state leaders in his hometown of Eppelborn.

Under her party’s plan, Kramp-Karrenbauer would be voted in as Müller’s replacement after Easter and would take over his position before or after the parliament’s summer break.

Since 2009, Müller has been head of a three-party coalition between his Christian Democrats and the Free Democrats and Greens – the only so-called “Jamaica” coalition in any German state.

Müller’s decision to step down follows a string of high-profile resignations from prominent Christian Democratic politicians over the past year-and-a-half alone. Both former Hessian state premier Roland Koch and ex-Hamburg Mayor Ole von Beust stepped down in 2010.

Müller said the CDU’s state leaders and Chancellor Angela Merkel had given him their blessing.

Before becoming state premier in 1999, the 55-year-old worked as a judge for several years in both district and regional courts.

During a press conference in Eppelborn on Saturday, Müller dodged questions as to whether he was looking to join the German Constitutional Court in Karlsruhe, saying simply he wanted “new challenges.” He added there was no need to make any decisions yet.

“There are different options,” Müller said.