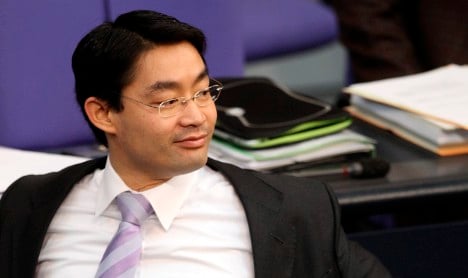 Shortly after Rösler concluded his speech at the FDP’s New Year reception in Wiesbaden, a woman of about 60 suffered a dizzy spell. The Health Minister, who is also a cardiothoracic surgeon, put his medical training to the test.

Rösler and his bodyguards rushed to her aid and carried her out of the event hall. After checking her pulse, the minister stayed by the woman’s side until paramedics arrived and took over.

Earlier, the Health Minister had made a “those who can’t, teach”-style quip, joking, “If you’re a good doctor, you don’t have to get into politics.”

In accordance with doctor-patient confidentiality, he did not comment on the incident.

After completing his high school exams (Abitur) in Hannover in 1992, Rösler started his medical training with the German armed forces, before continuing his studies at the medical university in Hannover and the Bundeswehr Hospital in Hamburg. In 2003, he left his position as a military surgeon to focus on his political career.

In recent months he has been the target of fierce criticism over his part in sweeping reforms to Germany’s healthcare system.