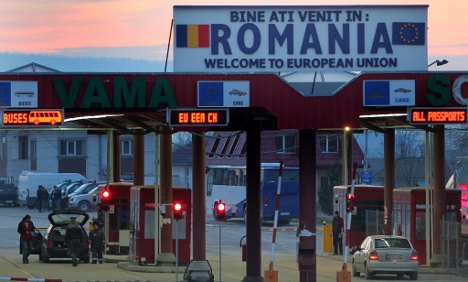 Bucharest and Sofia “have both made huge efforts to meet the technical requirements of the Schengen system. Those efforts are deserving of praise,” German Interior Minister Thomas de Maiziere said on the sidelines of a meeting of EU interior and justice ministers in Hungary.

“At the same time, there are shortcomings and criticisms about the judiciary and about corruption” in the two countries, de Maiziere said. “We believe it is important to link the two issues – the technical aspects and the political aspects – and make a decision taking both into consideration,” he said, insisting it would be “premature” for Bulgaria and Romania to join Schengen at the present juncture.

The two most recent EU members have declared Schengen accession a national priority this year, but they look set to fail in their membership bids in March in view of the objections of more than a dozen EU governments.

“Romania is ready to join in March but we are realistic and we know we have to wait and see what other member states are saying,” Romanian Interior Minister Traian Igas stressed after discussions with his counterparts.

“But we did fulfil the criteria put forward by member states,” he insisted, while ruling out the possibility of joining the borderless Schengen zone without Bulgaria. “It is for the first time I hear (an idea) like this. Romania has been a partner of Bulgaria on this road,” Igas said.

The Schengen zone allows more than 400 million citizens of 25 member countries to move freely without border controls from Finland to Greece and from Portugal to Poland.

The inclusion of Bulgaria and Romania would extend the zone’s frontiers eastward, and France and Germany have made their membership conditional on “irreversible progress” in the fight against corruption.

Romanian President Traian Basescu insisted Thursday that there was no indication of a heightened risk of illegal immigration into the European Union if his country joined Schengen.

Speaking to ambassadors accredited to Bucharest, he again demanded that Romania’s admission be based entirely on its technical ability to control its more than 2,000-kilometre (1,250 mile) borders, notably with non-EU countries Ukraine and Moldova.