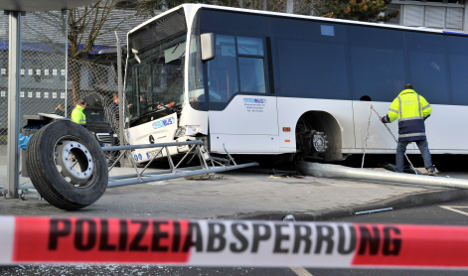 The shuttle bus hit the group while they were waiting at a bus shelter about 8:20 am, police spokesman Manfred Füllhardt said.

Reports said the bus ran over several people. One of them, a 24-year-old intern, died shortly afterwards. All of the five injured were airport workers. Two were in serious conditions, another police spokesman, André Sturmeit, said. The bus driver was taken to hospital suffering shock.

Airport operator Fraport said the bus involved in the accident served airport workers, not the general public. News magazine Stern reported that the shuttle bus was operated by the firm Frabus.

It was unclear what caused the accident. Sturmeit said there were no signs the driver had lost consciousness.

Public broadcaster Hessischer Rundfunk reported the people were waiting at the Lufthansa cargo area at a bus stop along the road that runs around the airport. It was unclear whether there were any passengers already on the bus when the accident happened.