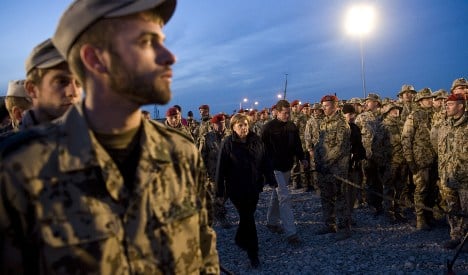 Parliamentary liaison to the Bundeswehr, Hellmut Königshaus, reported to the armed services committee that up to 10 soldiers were involved in an apparent game at an outpost near the German base of Kunduz late last year, news magazine Der Spiegel reported on Thursday.

A 21-year-old soldier from the Bischofswiesen district of Bavaria was shot in the head and killed. Previously, the Bundeswehr had announced that the young soldier was discovered with the gunshot wound and subsequently died during an emergency operation – the implication being that he had committed suicide or accidentally shot himself while cleaning his weapon.

The young soldier was a corporal with the second company of mountain infantry battalion 232.

Public broadcaster ARD reported that as many as 10 soldiers were involved in a “weapons games” in a tent at an outpost near Puli Khumri, south of the Bundeswehr military camp at Kunduz.

The fatal shooting happened shortly before Chancellor Angela Merkel visited the Bundeswehr troops in Afghanistan. Merkel at the time described the incident as a tragic accident.

ARD reported that there had been grave consternation in the Defence Ministry over the incident. Military police had investigated and reported to military commanders, but their report was not passed on to the ministry.

Der Spiegel reported that state prosecutors were investigating the incident as a possible case of negligent death.

The revelations are a blow to Defence Minister Karl-Theodor zu Guttenberg, who has strived to change the traditional mentality of keeping secret bad news and has urged officials to keep him personally informed by mobile phone of events happening in the field.