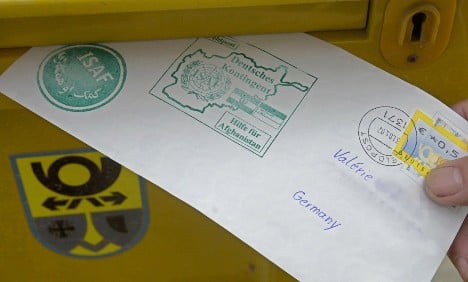 Hellmut Königshaus, parliament’s liaison to the military, has pressed Guttenberg to explain suspicions that letters from the front line in northern Afghanistan had been opened, news magazine Der Spiegel reported.

Königshaus was alerted to the situation when soldiers complained during a trip he made to Afghanistan last week. In a message to Guttenberg he wrote that “their letters to Germany were apparently systematically opened in large quantities.”

Letters arrived home to their loved ones over the last three months, “some with their contents, but opened, others without their contents.”

Most of the complaints came from paratroopers stationed out of Seedorf in Lower Saxony who are fighting alongside Afghan and American troops in some of the toughest areas near Kunduz, according to Königshaus.

The advocate for Bundeswehr soldiers alleges that letter tampering has revealed “sufficient evidence of a crime,” Der Spiegel reported.

One rumour circulating among the soldiers is that the letters could be opened to prevent sensitive operational details from being intercepted, but such measures would violate Germany’s privacy of correspondence laws, the magazine said.

The Defence Ministry said it is investigating the allegations.