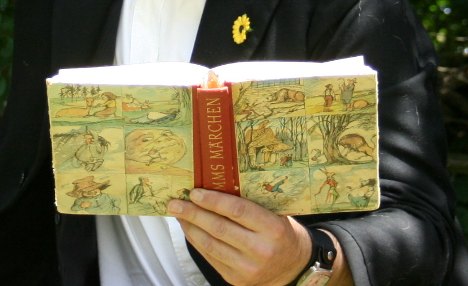 Storyteller Angelika Steiger knows how to keep the attention of a difficult audience – a group of sugar-overdosed six-year-olds attending a cops-and-robbers themed birthday party.

Wearing a playful yet traditional German dress, Steiger leaned into the group with an opening story of a fairytale princess with long braids and red high heels who sat on the edge of an old suitcase and began to tell fantastic tales.

Among her repertoire was the “Queen Bee” by the Brothers Grimm. It’s the story of a simpleton who saved the day in part by refusing to let his brothers wreck a bee hive while out on an adventure. In the end, a queen bee helps the simpleton solve the riddle. The castle is saved and the simpleton marries the princess. Other tales included a rendition of “Hansel and Gretel” as well as an interactive song about 10 small mermaids.

Steiger is one of hundreds of professional and semi-professionals in Germany who maintain and develop the traditional art of storytelling.

“It’s a niche offering: away from comedy, away from the television – and back to the art of listening as nourishment for the soul,” she told The Local.

As she competes for people’s attention, Steiger says she’s trying to revive the salon culture of the 19th century one evening at a time.

Steiger’s own venue is a refitted warehouse used to welcome up to 40 guests for evenings of music, lectures, storytelling and other cerebral pleasures.

When they are not treating old and young alike to tales of other worlds, storytellers like Steiger travel the country attending conferences and training workshops to further the oral tradition. Many of their tales were first recorded by the Brothers Grimm, whose famous book will be 200 years old in 2012.

Steiger, for instance, tells stories from diverse authors at schools, kindergartens, events, parties and at her own private literature salon in Frankfurt. She’s even discussing with a pastor how he could incorporate a performance of a Bible story in a service he is planning.

It’s fitting that Steiger’s collection of stories has a strong focus on the Brothers Grimm, who lived in the village of Steinau an der Straße, not too far from Hanau.

Home to an annual Brothers Grimm summer theatre festival, Hanau is also the most southerly point on Germany’s fairytale route.

The following Frankfurt-area storytellers can be booked for private events. Many are members of the European Storytelling Society.

Near Steinau an der Straße: