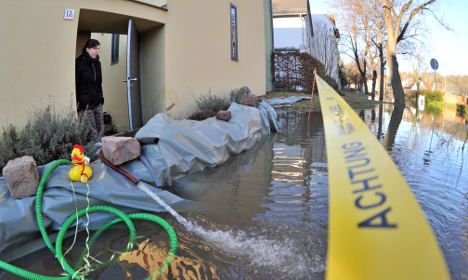 Fire departments in Hesse said they were preparing for the Main River to reach its highest level by evening following increased levels throughout the night.

“One centimetre per hour,” a spokesperson in Frankfurt said.

By midday flood waters there could reach as high as 4.8 metres, he said.

“Both the Main and the Kinzig are getting fuller,” he said.

Still both cities have been spared any major problems by the flooding, they said.

Further east along the Elbe River in the states of Saxony and Saxony-Anhalt officials said they were also expecting the high-water mark to be reached some time on Tuesday.

But in the south the historic Baden-Württemberg city of Wertheim reported that floods began receding overnight after reaching their highest level of 5.95 metres around 1 am. Water levels in the city where the Main and Tauber rivers meet are usually around 1.5 metres high.

“At the moment another wave is not expected,” a fire department spokesperson there said. “But I can’t make a further prognosis.”

The flooding continues to plague communities along rivers across the country as heavy rain accompanies a thaw melting large quantities of snow accumulated during frequent snowstorms in December.