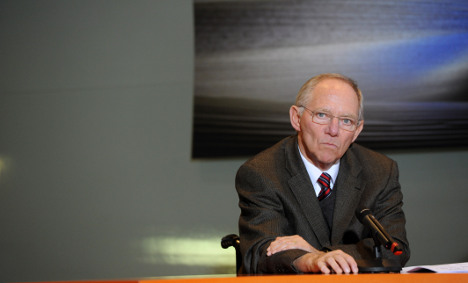 “Isolated proposals do not make the situation any easier, but rather more complicated,” Schäuble told Deuschlandfunk radio as finance ministers prepared to discuss changes to the emergency fund in Brussels.

The German minister reiterated Berlin’s position on the issue, saying he saw “absolutely no reason in the short term to debate” over an increase in backing for the European Financial Stability Facility (EFSF).

The fund was established to raise money on behalf of heavily indebted eurozone governments.

Schäuble added however that he had no objection to thinking “in the medium term” about changes to the programme, which is supposed to be replaced by a permanent mechanism in 2013.

“It is not a question of increasing or augmenting but of ensuring that the amount agreed to in May is in fact available,” he said.

The EFSF has a nominal value of €440 billion but because funds must be kept in reserve to maintain a top credit rating and obtain low interest rates, its effective capacity is more like €250 billion.

When matching funds from the International Monetary Fund and other European Union sources are included, the EFSF has a nominal size of €750 billion.

Germany, the biggest donor to the facility, has resisted calls for boosting that amount to as much as €1.5 trillion, as the coalition government headed by Angela Merkel gears up for seven regional elections this year.

In Brussels, eurozone finance ministers gathered meanwhile to find a way to calm financial market fears over the fate of countries like Portugal that are finding it harder to finance their debt.

Barroso has urged eurozone countries to move faster on the issue and has not hesitated to tell Berlin what he thought it should be doing.

“I expect top German politicians to respect the role of the commission. We in the commission have not only the right, but also the duty, to tell Europe’s citizens what we think is right,” he told German news magazine Der Spiegel.

Helping Greece and Ireland was deeply unpopular among German voters and Chancellor Angela Merkel is wary of being seen to stump up even more money ahead of seven state elections this year, the first on February 20.

But a survey of 250 firms in Germany published on Monday showed 57 percent in favour of the fund being enlarged, even if this cost Germany more.

It also found 60 percent of firms in favour of Brussels having more power in member states’ fiscal and economic policy.