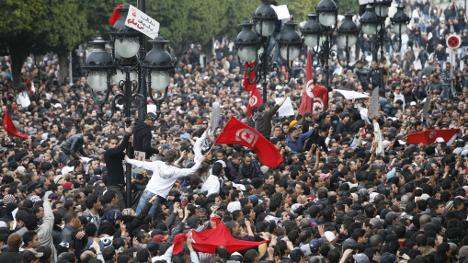 “I appeal to you to use the successfully achieved caesura in Tunisian history to create a new start,” she said in a statement.

She called for him to communicate with the protesting masses and introduce real democracy. “It is absolutely vital to guarantee human rights, media freedom and the freedom of assembly.

“Germany and the European Union are ready to support you in such a new start.”

Plane-loads of Germans touched down on home soil at various airports across the country after tourists were told by holiday operators to pack their bags and make their way to Tunisian airports.

They said locals had been caught up in street fighting and shopkeepers had barricaded up their property for fear of rioting while petrol stations and police stations had been smashed up.

Mass protests against corruption and high rates of unemployment resulted in the resignation of Zine el Abidine Ben Ali on Friday after he had ruled Tunisia for 23 years as the head of an authoritarian regime. He has fled into exile to Saudi Arabia.

Initially Prime Minister Mohamed Ghannouchi tried to form a government, but he was replaced on Saturday by Foued Mbazaa after the constitutional council appointed him as transitional president.

Mbazaa, 77, has been tasked to prepare the country and political body for elections, and has called on Ghannouchi to make suggestions for a new government.

German Foreign Minister Guido Westerwelle called on Mbazaa to ensure elections were democratic. “Take the route in the direction of democracy, ensure real stability,” he said.

Yet it is not clear whether the exit of Ben Ali and a curfew has calmed the situation, with smoke plumes visible and shots fired over the capital city Tunis on Saturday evening. Tunisian journalists have speculated that the army could be attacking Ben Ali’s presidential guard.

More than 130 people are said to have died in the unrest.

Opposition politician Mustafa Ben Jaafar told the French television station France Info that criminal gangs were taking advantage of the chaos and were looting shops and attacking government buildings, while other Tunisians said they feared members of the military were also taking part in the looting.

The Tunisian tourist office in Germany said travel to the country was not recommended. “It is too dangerous,” said spokesman Sami Krandel. “Luckily no tourist has died – until now it purely a national matter. I believe that a new government will return a bit of freedom to Tunisia which will improve the image of our country.”

The French government said over the weekend it would stop suspicious capital movement from its former colony, in order to prevent members of Ben Ali’s clan illegally taking state money out of the country.

It was reported on Sunday that Lucas Mebrouk Dolega, a French-German press photographer, whose image we have used to illustrate this story, has died as a result of injuries he sustained during rioting in Tunisia. He was hit on the head by a tear gas grenade on Friday, Der Spiegel reported, and has died, aged just 32.