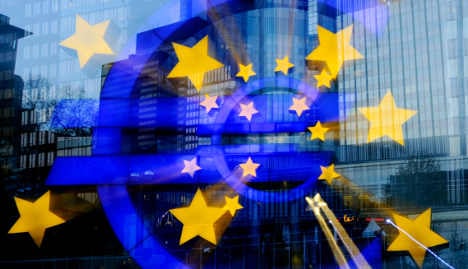 “First the government needs to make up its mind,” ING senior economist Carsten Brzeski told newswire AFP as reports from Berlin suggested it was in the midst of an internal debate on bolstering the European Financial Stability Facility.

Finance Minister Wolfgang Schäuble said last week the EFSF, which can raise funds on the bond market for debt-laden eurozone countries, should have a bigger lending capacity, but that its overall size should not be altered.

Schäuble told media in Berlin the eurozone needed a “comprehensive package, so that we don’t find ourselves in a situation every few months in which we have to start discussions all over again.”

The EFSF’s nominal size is €440 billion but because funds must be kept in reserve to maintain a top credit rating and obtain low interest rates, its effective capacity is more like €250 billion.

Even with money from the European Commission and International Monetary Fund, the eurozone could come up short if countries like Portugal and Spain follow Ireland’s lead in tapping the facility over the next two years.

A replacement, the European Stabilisation Mechanism (ESM), is to take over in 2013 but powerhouse Germany, which would in theory be called upon to pay the lion’s share of bailouts, is thus positioned to press for long-sought eurozone reforms.

Berlin has resisted an EFSF increase but could relent if eurozone reforms met its specifications, the daily Frankfurter Allgemeine Zeitung (FAZ) said.

The figure leaps to more than €one trillion with Italy, another country that could face financing problems, and Commission president Jose Manuel Barroso has urged eurozone members to move quickly on the issue.

But EFSF head Klaus Regling, who is German, said on Saturday in the daily Bild, “there is no emergency” that would force “hasty changes to the European rescue fund.”

German finance ministry spokesman Martin Kreienbaum told reporters, “We will examine the various different mechanisms … and see which screws could or should be turned so that the real amount of loans is higher.”

A key question is what Germany would want for signing off on an increase. Berenberg Bank chief economist Holger Schmieding said he thought it would include “much stricter adherence to the Stability Pact in the future.”

The EU’s Stability and Growth Pact was supposed to underpin Europe’s single currency but its terms have been violated by most eurozone members, including Germany.

Berlin might also seek a “financial markets transactions tax or some other measure” to ensure that the banking sector contributed to EFSF or ESM capital, Schmieding said.

As for closer coordination of economic policies, often mooted as a possible reform aim, he thought it likely only “along the German idea of setting standards for structural reforms, and then nudging countries to move towards such best practice standards.

“A bit like the old Lisbon agenda, but with teeth,” he added in reference to a failed EU plan to make its economy the most competitive in the world by 2010.

Brzeski agreed that Germans would be happy to review others’ budgets but would reject “a new policy in which the Commission or other eurozone countries can tell Berlin to get rid of some tax subsidies, change Hartz IV (unemployment benefits) or introduce a minimum wage.”

He mused half in jest that Berlin could press again for central bank chief Axel Weber to become the next head of the European Central Bank or revive its demand for a eurozone sovereign default mechanism.

Another possibility would be to require debt sustainability analyses for countries seeking EFSF aid, Brzeski said, which could lead to commercial banks, including German ones, taking losses on their sovereign debt holdings.

In fact, the economist concluded, “there is nothing Germany could really get from increasing the EFSF, it’s not tangible, I don’t see a tit for tat.”

“They give something instantly but what they get in return is always risky.” But with events nonetheless playing into Berlin’s corner, he joked, maybe “in a year from now we’ll have a stricter Pact, the default possibility and Axel Weber as ECB president.”