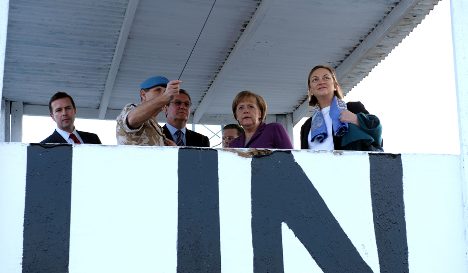 “Such attitudes and statements do not give the image of a far-sighted and visionary leader,” the popular Vatan daily quoted Erdogan as saying.

“We expect Mrs Merkel to review her history knowledge and apologise to the Turkish side, which has made all sacrifices for a settlement on the island,” he said.

During a visit to Cyprus on Tuesday, Merkel praised the Greek Cypriots for efforts to end the island’s 36-year division and blamed the Turkish Cypriots.

“We see the many steps you are taking and we also see how the Turkish side is not making the adequate response,” she said, addressing Cyprus President Demetris Christofias, a Greek Cypriot whose government is the island’s internationally recognised administration.

She also stressed Turkey had been punished by sanctions in its accession negotiations with the European Union.

The plan was approved by the Turkish Cypriots, but rejected by the Greek Cypriot side.

Shortly afterwards, Cyprus, represented by the Greek Cypriots, joined the European Union, with the Turkish Cypriots left out in the cold.

Erdogan slammed the EU for having failed to keep promises it made at the time to ease the economic isolation of the self-declared Turkish Republic of Northern Cyprus (TRNC).

He stressed Ankara would not back down from its Cyprus policy in return for speeding up its EU accession, according to Vatan.

The Cyprus conflict remains a major stumbling block in Turkey’s membership bid as it refuses to recognise Cyprus in its current state, and is the only country to acknowledge the TRNC, where it maintains a military presence.

In 2006, the EU froze eight of the 35 chapters the accession talks cover over Turkey’s refusal to allow Greek Cypriot vessels use its air and sea ports under a trade pact with the EU.

Cyprus has been divided since 1974 when Turkey occupied the north in response to an Athens-engineered coup in Nicosia aimed at uniting the island with Greece.